Inside the lid of the Legacy Edition box is the Random Labyrinth Drop Table, a handy tool for those times where you want to quickly assemble a random labyrinth for use in an encounter. The table is simple enough to use; all you need is the table, a six-sided die, and either the megahexes (found in the Legacy Edition box) or hex paper. Once you've assembled your tools, you start tossing dice into the box and recording the results (either by building the labyrinth as you go or sketching the design out on hex paper). As promised, here's a quick sample showing a small labyrinth constructed using the table and a little imagination.

Die Roll #1 - The die has landed on the large (four megahex) image on the table. Place the large megahex in the center of the table (or drawing the shape on hex paper). The result "four," tells us where to attach the next result. We can choose to populate this area now or later; let's choose now. Flipping to page 80 of In the Labyrinth, we roll 2d6 -- a "nine!" -- and then count the monsters until we find the Ogres. The book says that Ogres are "are usually found alone," so we'll say there's just one Ogre in this area. 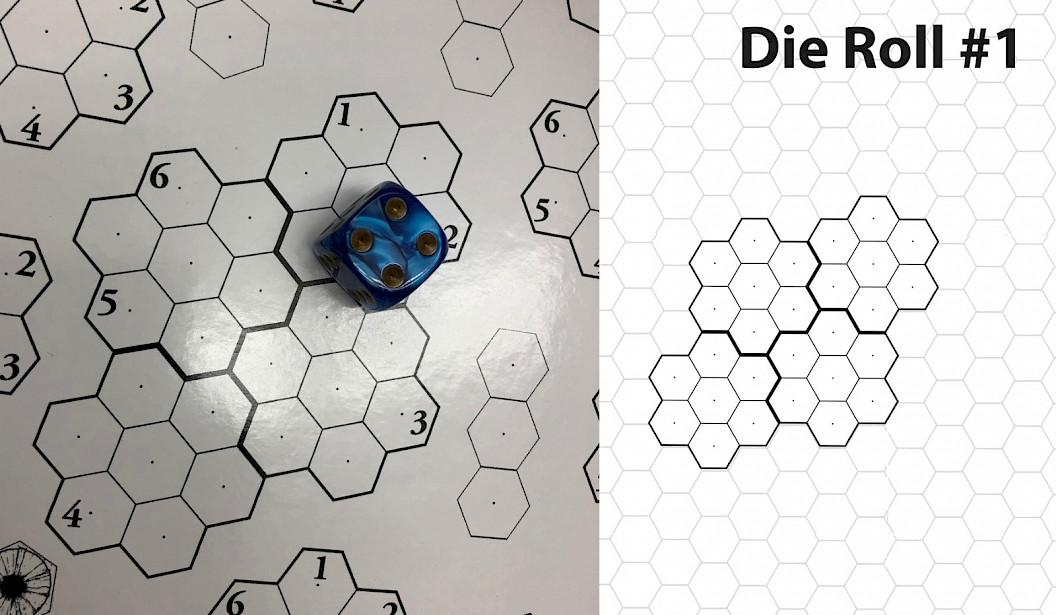 Die Roll #2 - A three straight megahex result, which we attach to the previously placed tile. The "five" result tells us where to place the next tile. To populate this area, we'll flip to "Nuisance Creatures" in the book and roll a single die: A result of "three," which equals vampire bats. The rules say that these appear in "at least groups of 25," so we'll stick with that number. This isn't gonna be fun for the characters! 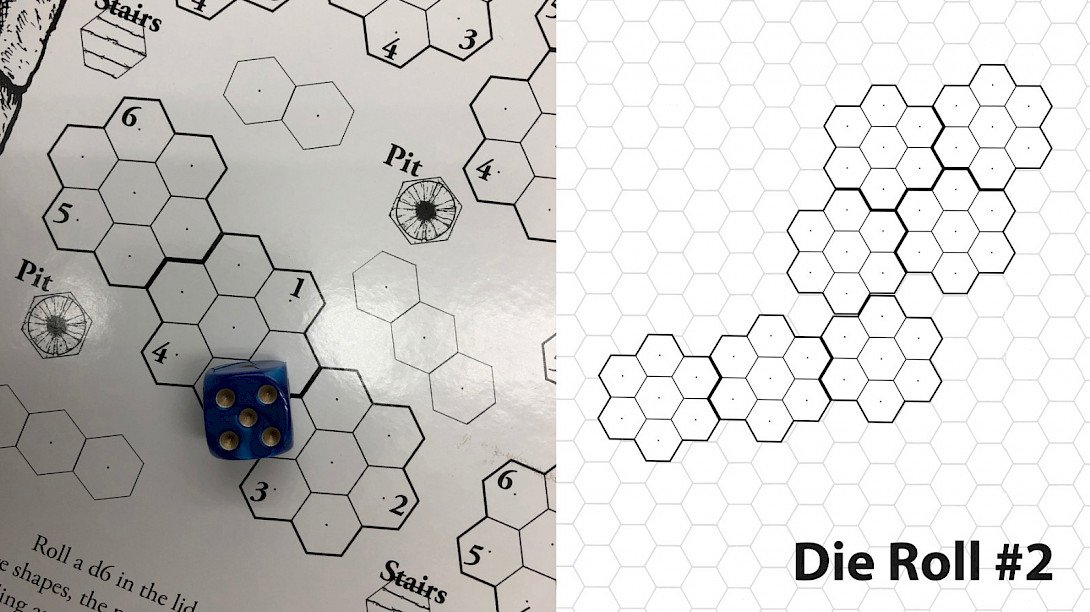 Die Roll #3 - The two megahex tile is placed adjacent to the previous tile, rotated so that it fits nicely in the area available. Let's flip to p. 94 and the "Giant Insects and Other Crawlies" and roll 2d6 for this area. A result of "six" tells us that there's a single Scolopendra in this area. Bash the big bug!!! 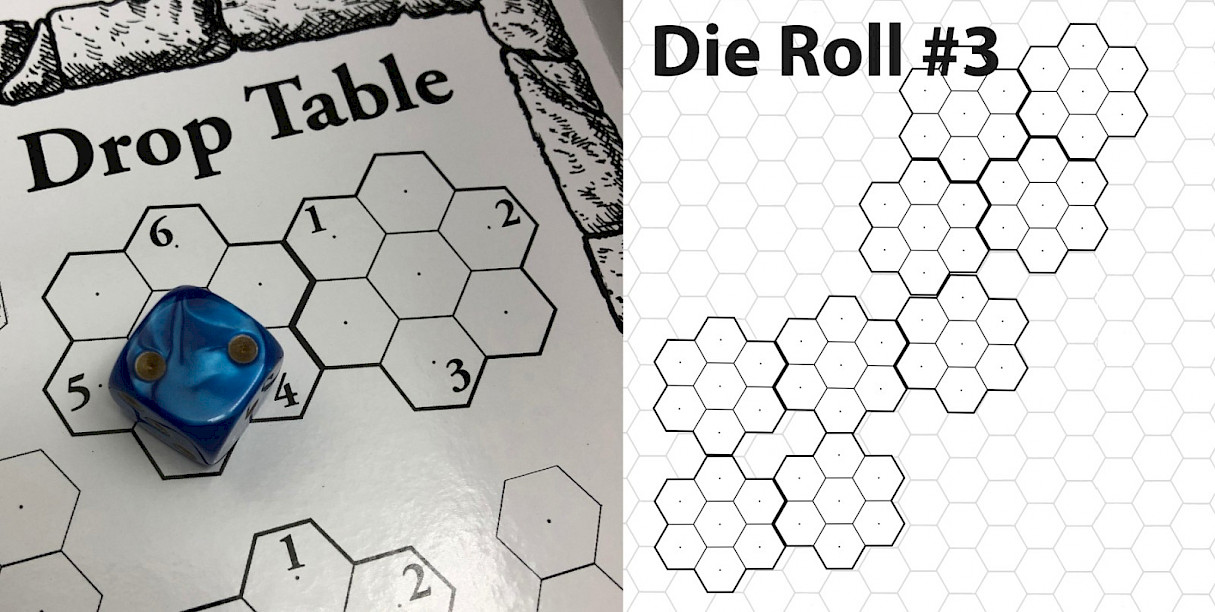 Die Roll #4 - Connecting to the "two" point as indicated by the previous result, the little two-hex tile feels lonely, so we decide to also attach a pit to the newly-placed tile. 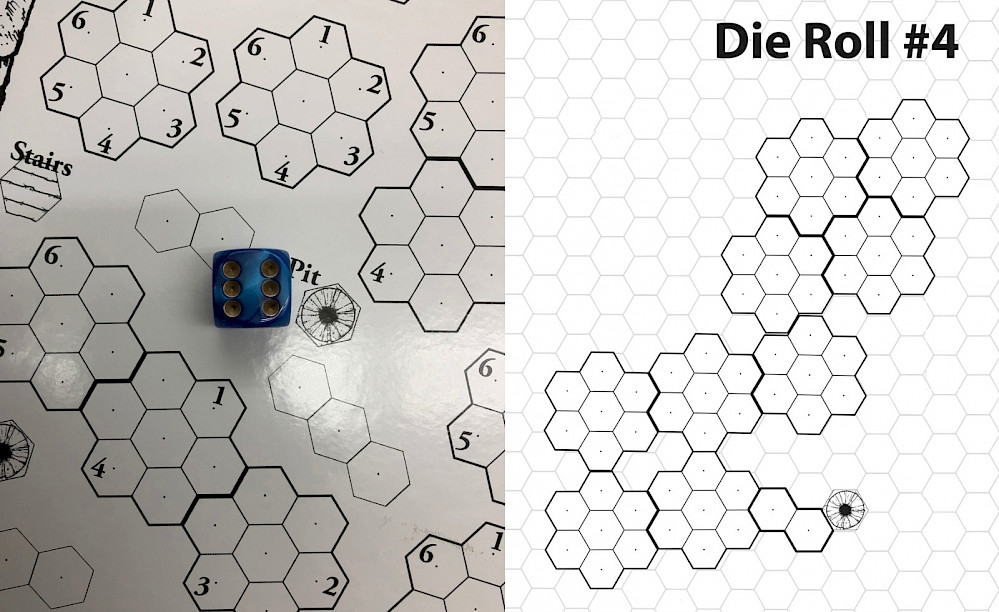 And that's where we decide to call an end to the first level of the labyrinth. The pit makes a great connection to a lower level; characters can use rope to climb down to the next level . . . if they survive long enough to reach the pit.

The random labyrinth drop table is a tool that you can use to help guide you when creating a map for your next adventure. Nothing here is law; the table is purely for inspiration and guidance and, as the GM, you should change, ignore, or follow any result that fits your own ideas. Populate the labyrinth as you wish, or allow the players to select the monsters that they wish to face in the dungeon (and then place the creatures as you feel is best).

Have you created a labyrinth using the table that you wish to share with others? Join in the discussion at the forums and let everyone know how you've used the Random Labyrinth Drop Table in your own adventures!