What is The Fantasy Trip? 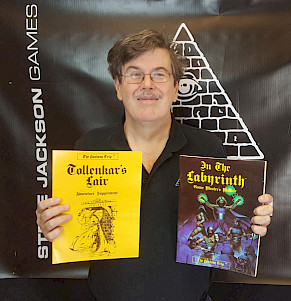 The Fantasy Trip is an “old school” RPG created by Steve Jackson. Its first element was released in 1977: the combat game Melee (see "Basic Combat in The Fantasy Trip"). That was followed by the magic game Wizard (see "Spells in TFT") and a set of releases to allow full roleplaying sessions. There were also various adventures, including the solos Death Test and Death Test 2 and the dungeon-crawl Tollenkar’s Lair.

The Fantasy Trip (hereafter, TFT) is more “cinematic” than “simulationist.” Its foundation, Melee, was intended as a playable set of rules for fantasy combat, but speed and ease of play are the goal, not an exact representation of every swing and every defense. One of Steve’s intentions was that Melee should be usable as a drop-in combat module for campaigns using other systems.

TFT is set on the mega-world of Cidri, a huge place which can contain every campaign world that anyone wants to create. Magical Gates connect many areas, so travel to very distant places is easy if you know the way. The background is unabashedly swords and sorcery. Elves are noble, dragons are greedy, and gunpowder weapons exist but are very likely to blow up in your face!

The game was very popular when first released, but when Metagaming went out of business around 1982, support ceased, and TFT was off the market for more than 35 years. In 2017, Steve Jackson regained the rights to his work and set about creating a new edition.

Though TFT has been out of print for decades, many fans have remained faithful to the game, and discussion on the SJ Games forums was active as Steve works to bring his 1970s “old-school RPG” up to 2018 speed, while keeping the fast play and fun in a world of swords and magic.

When the Legacy Edition came out in 2018, fans were happier . . . and there's been a lot of new support material since then.

Follow us on Kickstarter to see what new things are coming for TFT!