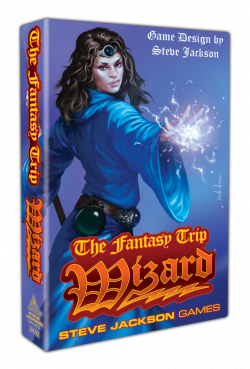 Remember to brush up on Basic Combat as well!

Since it started out as a tactical game (Wizard), the tactical effects of combat spells are detailed. Combat spells directly affect either the characters or the game map.

There are four categories of spell:

Spells are ranked according to the IQ required to learn them. If your IQ is 12, for instance, you could only learn those spells listed at IQ 12 and below. That still leaves a lot of good possibilities, but wizards will always be hoping to get a little smarter and learn a little more.

In the original TFT, you could also only ever have a number of spells equal to your IQ. In my new draft, that is still the limit when you start, but by paying XP you can get more spells even if you do not raise your IQ. You are still limited to the list of spells allowed to your IQ.

Casting spells uses a wizard’s ST. Every spell has a ST cost to cast. Some, such as Creation spells, also have a ST cost to maintain. Keeping that wolf-illusion around and biting is very useful, but it burns your own ST.

No discussion of wizards would be complete without a mention of the wizard’s staff. So here it is: a mention! Those rules are still in flux (see this forum post to learn more) as I type this. All I should say right now is that the staff in the new edition will be an even more useful tool than it was in the original.

To discuss this latest article, please join the conversation on the forums. For notification when The Fantasy Trip project launches, please follow Steve Jackson Games on Kickstarter.