Basic Combat in The Fantasy Trip 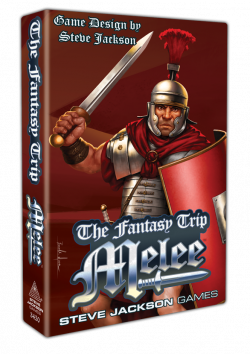 Combat in TFT is very simple. You start by choosing your strength and dexterity. DX and ST are drawn from the same pool – in Melee they total to 24. High ST lets you use bigger weapons and do more damage, High DX lets you hit more often. If you like, you can have armor which interferes with your own attacks, but interferes much more with attacks on YOU. The heavier your armor, the fewer hits get through! Let's say you choose ST 14 (a human average is 10). Your starting total in Melee is 24 points, so if you have 14 ST, that leaves 10 points for your DX – only average. You will hit your target about half the time. But that Strength 14 allows a big weapon if you can land a blow.

Suppose instead you took the opposite: only 10 ST, but 14 DX. You would attack sooner each turn – faster DX strikes first. And with a DX of 14, you would hit most of the time – it’s easy to roll 14 or less on three six-siders. You might even want to give up some of that chance to hit by buying arnor. This weighs you down, reducing your adjDX when you fight, but that armor will stop damage every time you get hurt!

The first part of each turn is housekeeping. One player rolls for each side. The winner gets initiative for that turn, and can choose for his side’s figures to move first or second.

Next (if any of the players are wizards; we'll discuss Wizard in a future article) is the optional renewal of any continuing spells cast on previous turns.

Next is movement. Each player chooses an option from a list of over 20, and moves the movement portion of that option. Most of those 20+ options are for special situations, with things like “move your full move,” or “move one hex and strike” getting the majority of the action. Turns are five seconds long, so there’s time for some creativity in your planning each turn , , , but, all too often, the final stage of the battle will be resolved by hacking at each other.

Next comes the Attack Phase. The figures attack in the order of adjusted DX (DX is adjusted for the armor you wear, the shield and pack you carry, and a host of special situations).

Unless you have a pole, thrown, or missile weapon, you can strike only at a foe in one of your three front hexes. If you are in his side hex, he cannot strike back at you, which is how maneuver becomes important.

Because figures attack in adjusted DX order, a slow figure may be crippled or killed before his turn comes to attack. That is the disadvantage of heavy armor – it slows you! But your armor and shield can turn a fierce attack into a scratch, or nothing at all.

Attacks are further subdivided by type. If there are any pole weapon users, they go first, because their weapons strike at the greatest distance Then come most other weapons: ordinary swords and maces, thrown weapons, missile weapons. Finally come “second shot” missile weapon attacks, from those few archers so speedy that they can fire two arrows in a single turn.

Weapons take effect instantly when they strike! If you are faster than a foe, you have a chance to wound or kill him before his turn to attack comes.

The last phase is end-of-turn retreats. The damage from Shock Shield spells, in Wizard, is also figured at this time.

It is now time for a new turn, unless only one character is left with ST of 0 or above.

To discuss this latest article, please join the conversation on the forums. For notification when The Fantasy Trip project launches, please follow Steve Jackson Games on Kickstarter.