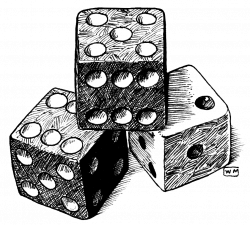 These are magical creatures that carry a Curse spell, and are, themselves, attracted (or created?) by bad luck. Any time two critical failures are rolled within five minutes, the GM may roll against the IQ of the dumbest character to see if dice lice have appeared. If three critical failures happen within five minutes, the dice lice will certainly manifest themselves.

Dice lice put a 2-point Curse on each individual who actually rolled the critical failure, and a 1-point Curse on everyone who was nearby; that generally means the whole party gets them. They usually remain until someone rolls an unmodified critical success. Anything that will get rid of a curse, or destroy an elemental, can also remove dice lice, one character at a time. Neither the characters nor the players should receive notice that dice lice have appeared or disappeared. Like luck itself, they are ineffable. A Reveal Magic spell will show them as swarming green mites on their victims.

Tragically, there seem to be no equivalent helpful creatures.

To discuss this latest extra for use with The Fantasy Trip roleplaying game, please join the conversation on the forums. For notification when The Fantasy Trip project launches, please follow Steve Jackson Games on Kickstarter.