Staffs In The New Fantasy Trip 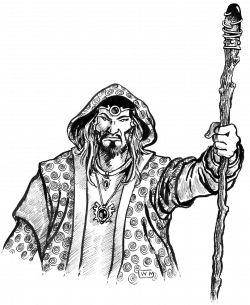 The staff is the mark of the wizard. In the original TFT, wizards’ staffs were potent, but in the new version they are more so. There are now five “levels” of staff, each more powerful than the one before. Here's an advance look at staff rules and spells.

Wizards spend their strength (ST) to cast their spells, and a wizard who is out of ST is powerless. One of the main advantages of a staff is that even the most basic one can make an occult attack that costs the wizard no ST. This attack is improved in range and power as the wizard learns the advanced Staff spells.

Higher-level staffs can actually store ST, giving the wizard much more spellcasting punch. The “Mana” stat of a staff is the amount of ST that it can hold. Wizards can spend 200 experience points to upgrade the Mana stat of a second-level staff, starting at 0 and topping out at the wizard’s IQ. No need to waste character points now to build a wizard with great physical strength. His staff can store ST until it’s needed.

And at a high enough IQ, a wizard can have a staff that is undroppable, unbreakable, and automatically zaps foes 2 hexes away with 1d+2 damage that goes right past all physical armor . . . while the wizard is casting another spell! Now that is a staff.

Staff (S): This spell is used to make any length of wood, bone, or silver into a staff. ST cost is 5.
A wizard does not have to have a staff. If he wants one, he must know the Staff spell to create one. The wizard need not create the staff during the game (except to replace a broken one). If he knows the Staff spell, he starts with a staff, without spending any ST to create it.
Regardless of what the staff looks like – rod, wand, quarterstaff, etc. – it is an occult weapon which does one die of damage (adjacent hex only) when the wizard points with it. Hitting with the staff is treated just as though the wizard were a fighter using a one-die weapon, except that he can roll against his IQ if it’s higher than his DX! It costs the wizard no ST to do this; it is not drawing its power from him. The staff does not even have to touch in order to deliver its flare of magical energy.
A wizard who has a staff may keep it in hand at all times, even when he is casting spells; it gives him no advantage or disadvantage. A staff can be affected by a Drop Weapon or Break Weapon spell.
If anyone other than the owner of a staff picks it up against the owner’s will, it explodes, doing the fool who touched it 3 dice damage.

Staff II (IQ 11) (Manastaff)
Like the basic Staff, except it now has a Mana stat to let it be charged with ST. By spending XP, the Mana stat can be increased from its starting 0 up to the level of the wizard’s IQ. No one but the wizard may ever draw strength from his staff. See Mana and the Wizard’s Staff, p. 00.
Also, the staff’s occult attack now bypasses the armor or natural defense of its target. Magical defenses such as Stone Flesh still operate.

Staff III (IQ 13) (Staff of Striking)
Like Staff II, except that its occult attack may strike a figure two hexes away in any direction from the wizard, and the to-hit roll is made at IQ+3 or DX+3, whichever is better.
This staff is immune to Drop Weapon and Break Weapon spells and critical failures.

Staff IV (IQ 15) (Staff of Power)
Like Staff III, except that no roll to hit is required, and the attack is a free action – the wizard may use the staff’s strike while doing anything else, including attacking, running away, or using the staff as a physical weapon. However, if the staff is used as a weapon, its occult strike must be directed at the same target.

Staff V (IQ 17) (Staff of Mastery)
Like Staff IV, except that the Mana stat of the staff may be raised, by spending XP, up to twice the wizard’s IQ, and its occult damage is increased to 1d+2.

Note that each level of Staff replaces the previous one in the wizard’s memory, so whatever level he has worked up to, it counts as only one spell.

To discuss this latest preview of The Fantasy Trip roleplaying game, please join the conversation on the forums.