From The Space Gamer: Tips for TFT Players 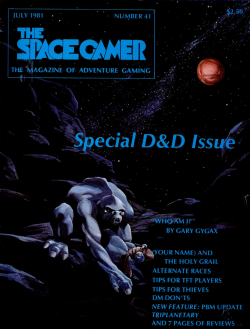 The following is a list of hints based on almost three years of TFT play. I hope that this article will inspire some of you other players to write in and share your experiences.

1. Sending a character out into the world with a low DX should be grounds for a charge of criminal negligence.

More often than not, I have seen the smart, the strong, and the heavily armored ripped apart by the quick. Characters with a low adjusted DX flail away turn after turn without hitting, low DX wizards waste ST on botched spells, and both usually meet a quick end if they have to make a saving roll against DX. An adjusted DX of 10 gives a 50% chance of hitting, casting a spell, or making a 3 dice saving roll. Because of the bell curve nature of the numbers generated by 3 dice, a 9 reduces your chances to 37.5%, while an 11 raises it to 62.5%. The lesson from these figures should be obvious: Don’t start a character with a DX lower than 10. Don’t encumber him with armor or goodies that reduce DX below 10. Don’t have him use weapons he doesn’t have the talents for, or that are too big for him. Pick talents that raise DX.

A related matter: DX points “traded off” for armor protection are a better deal than those same points allocated to ST, when it comes to protecting your character. Say you have a beginning character and you’ve given him ST 10, DX 10, IQ 10. You still have two points to give him. Your main concern is keeping him alive. Assuming I’ve convinced you to maintain his adjusted DX at 10, you have two options. You can give the 2 points to ST, and he’ll get to absorb two hits of damage once. But if you put the two points on DX, you can put him in leather armor, (and still maintain an adjusted DX of 10), and he can absorb two hits of damage any number of times. (But to keep your decision from being too easy, though, remember that ST is good for other things besides absorbing damage, like bigger weapons and being able to carry more loot and equipment.)

I don’t know if it’s just the people I play with, but in my experience beginning players tend to overvalue missile weapons at the expense of pole weapons. Due to the close-quarters type of fighting most prevalent in TFT, bowmen usually get off a shot or two and then get sliced up by an adjacent figure while trying to draw a new weapon. If this happens to you, try screening your missile weapon users with polearm wielders. The +2 DX for a set pole weapon, and the double damage bonus for a charge attack, make polearms devastating. The Advanced Melee rules, with two-hex jabs and polearm attacks coming off first, make them even more effective.

The next time your group of adventurers takes on a giant or a dragon, try to get somebody with a pole weapon around behind it. The +2 or +4 DX and the double damage bonus will usually bring a quick end to your adversary.

3. The character who tries to do everything usually ends up doing nothing well.

This applies more to beginning characters than to the “veterans.” This is mainly a matter of selecting talents wisely.

For starters, if you have to have a character who knows both spells and talents, you’re better off with a wizard who knows a couple of talents, rather than a hero who knows a couple of spells. Wizards pay double to know talents (and in some cases not even that), while heroes pay triple for spells. Heroes also cast those spells at -4 DX. Don’t waste your hero’s attribute points knowing something they can’t use very well.

When picking talents for new characters, don’t spread their areas of expertise too thin. There is a tendency to try and make a jack of all trades. Don’t. Consult the table of jobs and pick those talents which will make your character strong in some area from the start, (fighter, leader, thief, martial wizard, etc.). Later on, as he gains experience, you can turn him into a cardboard Renaissance man.

Say you have two IQ points to allot to a weapons talent. If you take a peculiar weapons talent, like Lasso, you can use a lasso, period. But if you spend that two points on Sword, you can use up to eight different weapons, depending on your strength. If your character should ever get caught weaponless on an adventure, he’ll probably be able to find a suitable sword to use long before he finds a boomerang or some nunchuks just lying around.

When selecting a wizard’s combat spells, consider giving him a high/low mix. Give him the most powerful missile spell he can use, the most powerful defensive spell, and one of the “cheapies,” like Blur, that doesn’t cost much to cast. The same goes for summoned creatures; take the most powerful one you can get, but also take Wolf or Myrmidon. It’s been my experience that the character who loads up on the fancy spells usually doesn’t have the ST to power more than a couple of them over the course of an adventure, while the wizard with several of the simpler spells proves to be more of a help to himself and his companions.