From The Space Gamer: The Flinger and the Blob 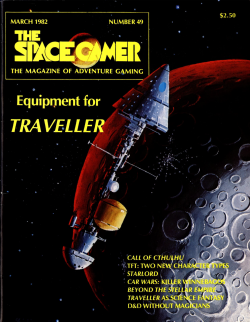 Probably the best munchkining of the TFT rules that I ever heard of . . . and directly responsible for some tweaks to the new edition rules.

Recently I played Death Test 2, trying an experiment with new types of characters. It worked out (a party of four 32-point figures came through without a loss, even with rooms picked at random to make it fair), so I thought I’d report the results. These character types are made up with a Death-Test-type adventure in mind, but can be of use in any TFT adventure.

With the advent of TFT, all of us old Melee players watched our favorite weapon, the light crossbow, become obsolete. It’s been replaced by the boomerang, which is easier to use and does as much damage. Coupling this with the insidious stopping power of the bola and the awesome hit potential of a barrage of sha-ken produces a powerful character: the Flinger. Statistics for a beginning Flinger are given below:

He carries as many boomerangs, bolas, and pouches of sha-ken as you can talk the GM into. He also carries a small shield.

Let’s see how he fights. His high DX will probably let him get off the first action. With his Thrown Weapons talent, he can throw a weapon on the tum he readies it, so he can chug out one throw per tum. First (range permitting) he tangles a foe’s arms with a bola, reducing him to helplessness for at least two turns. With the Thrown Weapons bonus, his DX to bola an adjacent foe is 16, minus one per additional hex, so the odds are in his favor out to 6 hexes away. Then he polishes off said foe with a volley of boomerangs. His DX with a boomerang is 15 (the Thrown Weapons bonus canceled by the fact that he’s two points understrength). Remember that boomerangs are treated as missile weapons when calculating DX penalties for range. His boomerangs do 2d-1 damage when they hit (-1 for under­strength penalty), which is as good as a shortsword. If an unarmored foe comes adjacent, the Flinger can emulate a machine gun, throwing 9 sha-ken at DX 10, or 12 sha-ken at DX 8. Each does 1d-2 damage when it hits; altogether, there’s about an even chance of scoring the 8 hits needed to knock the attacker down. If a very heavily armored foe is adjacent, the Flinger can try to throw a single sha-ken through his faceguard (dagger marksmanship rules) at DX 10: it does 1d-2, doubled if it hits, and the victim’s armor and shield don’t help. Finally, since the rules don’t require the use of more than one hand for all of the above, the Flinger can carry a small shield in his other hand, stopping 1 hit/attack.

Not bad for a beginning character! As he gains experience, most of it will go into DX: he can then increase his range and effectiveness (particularly the effectiveness of his 12 sha-ken barrage), or alternatively, start wearing armor, keeping his adjusted DX the same and gaining protection. All in all, he’s not someone you’d want for an enemy.

Another word along these lines: in an adventure like Death Test, there’s much to be said for making mini-Flingers out of wizards. In such an adventure, where wizards’ strengths must be carefully husbanded (which I feel makes such adventures more challenging and interesting than the routine of “throw a 7-die fireball, stop and rest up, throw another . . .” encountered in some TFT adventures), wizards spend much of their time standing in back doing nothing. It only costs 6 IQ points to buy Thrown Weapons and Boomerang, which skills allow the wizard to become a useful part of the barrage, and he still has enough IQ left for Illusion, Fireball, Sleep, and a few others (these spells seem to be a wizard’s mainstays; others, like Control Animal, Reverse Missiles, etc. are occasionally very useful, but if there’s more than one wizard in the party, they can be split among the available wizards, so that someone will have the spell if you need it, and still all the wizards can throw boomerangs). This all sounds good, you may say, but who’s going to hold off the mobs of sword-armed orcs while the Flingers are flinging? And another perennial problem in making up parties: who’s going to bring useful talents like Physicker, Tactics, etc., and how can he be kept from getting killed? The answer lies in another new character type . . .

The basic idea behind the Blob is to keep the enemy engaged while the Flingers take care of him, and also provide a safe repository for the party’s vital talents. Remember how nice it was to have a heavily armored upper-level character? Now you can have the same benefit (sort of) from a beginning character. Statistics for a 32-point Blob are given below:

He wears plate armor and carries a tower shield and a bastard sword; he stops 8 hits/attack, and his movement allowance is 6. (If you’re using nonhuman figures, you can make him a dwarf: then his DX can be 6, freeing 2 more points for IQ or ST; also, he can carry twice the weight.)

You may have noticed that his adjusted DX won’t be very high. Let’s tote up the damage. He wears plate armor (-6), carries a tower shield (-2) which he doesn’t have the talent for (-4), swings a sword he doesn’t have the talent for (-4), and carries 3 to 4 times his strength in weight (-1). His adjusted DX to hit with his sword is -9! The point of this is that there’s no difference in the rules between DX 5 and DX -9: he still hits on 3 (triple damage), 4 (double damage), or 5. And even if you have a reasonable GM who says "I don’t care: This guy only hits on 3," the Blob isn’t out there to hit anyone; he’s there to keep the enemy busy while the Flingers kill him. Standing a hex or two in front of the rest of the party, he has the power to keep foes engaged, keeping them off the necks of the Flingers and wizards, meanwhile taking little or no damage from their attacks, due to his heavy armor. And as party leader, he can help you avoid trouble by spotting traps and making friends out of potential attackers, as well as providing healing for all after the fights.

Although Hugo was a strong youth, his lack of dexterity kept him from taking up the career of wizard or warrior. Instead, he turned to learning, amassing a diverse collection of skills and knowledge. Well liked by all who knew him, he stood out as a natural leader, and his advice was frequently sought. When the call to adventure sounded, he generally preferred to remain at home, functioning as an adviser for the collection of friends and followers who had gathered around him. Now, however, he has been drawn out of his armchair (by some great quest?) to walk the glory road at last, though not without taking the wise precaution of obtaining the strongest armor available. Now at the head of a picked group, he is about to come face to face with . . .

A word of caution about playing a Blob, though: he doesn’t gain experience rapidly. He can easily go through a whole adventure without landing a blow. This may relegate him to being one of the two or more characters being played by the same player. All that no-joy die-rolling can get frustrating.

I hope you enjoy trying out these character types. They can add a lot to a party, or, on the other side, they can be a nasty surprise. I would be interested in hearing your comments.