From The Space Gamer: Playing Paragon 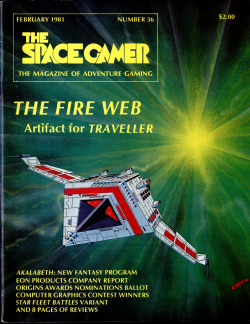 When, very early in my D&D career, I rolled up my first paladin (an affable chap named Astolph who has an intense dislike of undead), I barraged the DM with questions about the character’s requisite behavior: Can he sympathize with an evil foe? Call for help when his life is threatened? Weep? Destroy an inhuman foe who is surrendering? Make love? Marry? Sire children? Crack jokes? Make awful puns?

The collective answer was NO. The reason was BECAUSE HE'S ABSOLUTE LAWFUL GOOD. The DM was fourteen. His only idea of paladin-type behavior seemed to come from watching Launcelot in the musical version of Camelot. His supposition that each of the listed activities was inherently evil was frustrating in the extreme.

Most of his answers fall before logical reasoning. A paragon-figure, besides going out, destroying evil, gathering loot, and giving most of it away, is trying to act as a role-model, a racial/national hero-figure to whom the young and weak may look for advice or aid.

The society of the paragon’s people, his protectorate, will influence his behavior to a great extent. A paladin from an England-like kingdom will not act identically to a paladin from a Japan-like land; chivalry is not the same thing as bushido.

A paragon born in Rohan already has certain of his behavior modes laid out before him. He’ll be a Rider of Rohan. 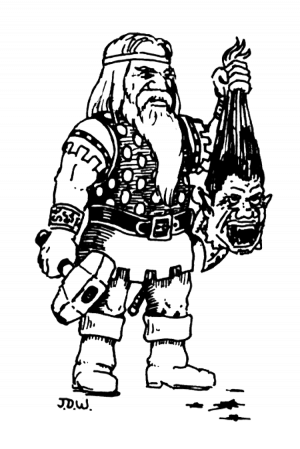 As a role-model, he’ll try to become a superb horseman. On the other end of the spectrum, an Earthsea paladin may not even know which end of a horse is which. He’ll become the best seaman he can.

Some DMs allow non-human paladins. Obviously, an elf-paragon will not function as does a dwarf-paragon, and neither’s behavior could be confused with that of (yech) a half-orc-paragon. (The concept of a prootwaddle paragon is so chilling that I will not deal with it.) The elf will fight for woods and streams, for love of things green and growing. The dwarf will defend deep tunnels and caves of dwarfkind; he will be moved much by the beauty of gold, though he will not accumulate much. The half-orc will fight to express his dislike of the other character races, and the world at large.

There are certain weapons appropriate to a paragon. A human paragon will automatically opt for sword and shield, unless his culture emphasizes some other weapon. The elf-paragon will master sword, spear, and bow. The dwarf­paragon will choose first the axe and hammer. The orc-paragon will probably pick up the nastiest thing available, then drag it in a swamp to poison the edges.

A paragon will develop his abilities to benefit his people. Expressed in TFT terms, almost any paragon may have Literacy, Courtly Graces, Charisma, Diplomacy, New Followers, Tactics, and Physicker. A human will also have Sword and Shield at the very least; an elf, Sword, Spear, Bow, and Woodsman; a dwarf, Axe/Mace, Thrown Weapons, Engineer, and Mechanician. An orc might have Whip or Monster Followers.

If the paragon’s society does not disallow it, bedding a consenting partner will do neither harm. A paragon can obviously feel sorrow for his opponent (as he cuts him down); a paladin can interpret “mercy” to a surrendering vampire as the release of its soul from its soon-to­be trashed mortal form. A paragon born to a witty Renaissance-type society may be an unstoppable punster and will probably opt for rapier and main-gauche in lieu of broadsword and shield.

Regard Arthur Pendragon, legendary King of Britian. Was he not a paragon? He carried forth the noblest ideals to his people, and fought for them with all the abilities and forces at his command. He was surely a paladin. Yet he suffered much in spite of all his goodness, was betrayed, and died unhappy. Though a paragon, he was still a feeling, mortal man, not the typical boring personification of good.