From The Space Gamer: More Handicaps for TFT 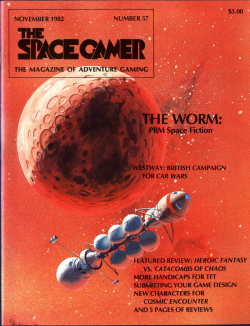 In issue 51, Forrest Johnson presented an article on handicapped characters in The Fantasy Trip; it proposed a number or handicaps with which characters could define their personalities further and also start off with more initial attribute points. Physical and personal defects such as alcoholism, myopia, satyriasis, kleptomania, cowardice, and blindness were presented; for each disability a character took, he was awarded a certain number of starting attribute points.

Reader Ralph Sizer, following in the grand tradition, has given us several more appropriate disabilities. We won’t be presenting TFT handicaps as a regular series, but we felt these were useful enough to warrant a few more pages.

Dyslexia: (“What does that say?”) This is the lack of the basic eye-to-brain coordination needed for reading; a character with dyslexia can never learn Literacy, or even basic map-reading. He also can’t learn to read music, but can become a Bard or even Master Bard.

Acrophobia (Fear of Heights): (“Get back from the edge!”) It goes without saying that a character with this affliction can never learn Climbing. He must add one die to any roll against climbing a long way (a cliff, into a deep hole, or out of a tree), since even being near an edge makes him a bit dizzy. Subtract 2 from DX any time he’s doing anything within one clear MH of such a long fall. He can never try to climb anything steeper than a flight of stairs unless he’s being chased by something nasty, or unless it’s the only way out. (Even so, he’d much prefer to look some more for another exit.)

Cuteness: (“You’re a nice kid.”) This affliction can strike people of either sex and any species. Physically, victims are no more than 9/ 10 of the average size for their species, sex, and age, and have cheerful, round faces and soft-looking bodies. They have an automatic Charisma talent. They can learn Tactics or even Strategist and use them, but nobody else will ever take a cute person seriously enough to let him command in battle. In strategy conferences, anyone wanting to take his advice must first make a 4-die roll against IQ (only very wise people will consider advice from someone who reminds them so strongly of a teddy bear).

At some time between ages 35 and 50 (say, 32 +3d6), this handicap changes its name to Grandmotherliness or Grandfatherliness, but all its effects remain un­changed.

Migraines: (“Whadda ya mean, you can’t fight in the afternoon?”) Roll one die. If it comes up 1, the migraines usually strike in the morning; if 2-4, in the afternoon; and if 5 or 6, in the evening. Each day the GM rolls one die. For afternoon migraines, this gives the hour the headache strikes that day. For morning migraines, add 6 to get the hour, and for evening migraines divide by 2, round up and add 6. The migraine will go away if the character lies down and rests for two hours; it will go away after four hours even if he doesn’t rest. (Time spent resting with a migraine headache does not also restore ST lost due to fatigue or spellcasting – he can only rest up from one thing at a time.) During a migraine attack, characters operate at DX -3, movement allowance is reduced by 2, and any Alertness or related ability he may have (Detect Traps, the Naturalist’s ability to spot ambushes, etc. – anything requiring careful concentration) are lost for the duration.

Narcolepsy: (“Z-z-z-z . . .”) This is the tendency to fall asleep unintentionally, even when well-rested. Nowadays there are drugs that greatly alleviate the problem, but there are none such in a primitive fantasy world. A character rolls two dice against IQ for each minute to avoid falling asleep if left standing around with nothing interesting to do, three dice if sitting, and four if lying down. Falling asleep is automatic if left on sentry duty or if listening to a boring discussion for over five minutes. Someone with this handicap can never learn Alertness, and must spend twice the normal amount of time learning anything that requires a lot of reading.

Reputation: (“Hey! Aren’t you the one who . . .”) Back in his teens, this character did something very remarkable, and will never live it down. It may have been something glorious, like killing a large dragon or demon with one extremely lucky shot. (In this case, every young punk for leagues around will be eager to challenge him, to be able to say, "I’m the one who killed . . .” Also, anyone drawing up an order of battle will go by his reputation and give him a position suit­able for a fighter or wizard with half a dozen more attribute points than he has.)

Or it may have been a disgraceful event – the character got drunk one night and made love to half a platoon of orcs, or tried a practical joke that backfired, making him the only person known to have tarred and feathered himself. (In this case, everyone will always expect him to act the same – promiscuous, stupid, or whatever – and they’ll always underestimate his IQ by 3 points and treat all suggestions accordingly.) Also, reaction rolls should be adjusted up or down, depending on what others think of his reputation.

Asthma: (“Gasp, gasp . . .”) The victim runs out of breath after about one minute (12 rounds) of fighting, climbing, or other strenuous exercise, and must rest for five minutes to recover. If the victim has to fight for over a minute, reduce DX by three points per full minute. Someone with asthma can never learn Running, and can only spend one hour a day trying anything strenuous; since so much resting must go with the exercise, this hour cannot be combined with any other learning, no matter how sedentary. An asthmatic can learn Swimming.

One-Track Mind: (“Damn the torpedoes! Full speed ahead!”) For a fighter, this means "Charge!" If the other players insist on talking it over for too long (more than a minute), he charges anyhow and lets them follow or keep talking, as they prefer. For a wizard, it means "I’ll cast an illusion" (hawk or owl for scouting, an octopus with three bastard swords for fighting – no other choices) followed by a succession of the wizard’s most powerful attack spells if in combat. A character with this affliction can never learn Tactics or Diplomacy. If a talent has a naturally-related talent, the character must learn the related talent(s) as soon as possible – someone with a one-track mind who knows one thieving talent will either know or be studying them all; a Bard will get Master Bard as soon as he/ she reaches IQ 14, etc.

Rube Goldberg Mind: (“That’s too simple – it’ll never work.”) A character with this affliction will always support the most complicated proposal for action in any situation, and will usually add a few (or a lot) of his or her own suggestions to make it even more complex. If he’s in a strategy discussion, it may last several hours.

Squeamishness: (“Eeek!”)) This charac­ter just can’t stand the sight of blood. Every time he sees freshly-spilled blood, he must roll against IQ to avoid fainting: two dice if it’s just a scratch (1 point . damage), three if it’s a minor wound (2-5 points), and four if it’s a major wound.

Add one die if it’s his own blood. If some fool revives him from the faint in a position where he can still see the gore, he must immediately roll again -–and add one more die because he’s already feeling woozy from the first faint. A squeamish character can never learn Physicker or Vet.

Butterfingers: (“Oops!”) DX can never get above species starting level or DX 8, whichever is lower (he can’t avoid most of the harmful effects by making the character a halfling). A butterfingers must roll two dice against DX to avoid dropping any­thing he’s picked up or just been handed.

Claustrophobia: (“I can’t breathe in here!”) Anyone with claustrophobia should keep out of dungeons in the first place. However, if he does want to go in, he must first make a four-die roll against IQ to enter. Once in, anytime he enters a long (over 4 MH) or crooked (end not in sight) corridor, he must roll one die against the width of the corridor in hexes (one MH = three hexes measure at the widest point); failure to make the roll means he runs back out of the tunnel. Finally, no claustrophobic can sleep or even relax underground, so wizards cannot recover ST. (A Sleep spell will solve this problem.)

Rheumatic Fever: (“My chest . . .”) The character had a severe case in childhood. This means a permanent lack of strength – he/she can never get above his species’ starting strength, or ST 12, whichever is lower. Prolonged exercise is likely to be fatal. After any fight in which he’s taken action, roll against ST, one die for each full minute the character participated in the fight. If the roll is missed, he has a heart attack and can be saved only by a Master Physicker rolling four dice against IQ. The same goes for running fast or swimming.