From The Space Gamer: Minor Institutions of Cidri 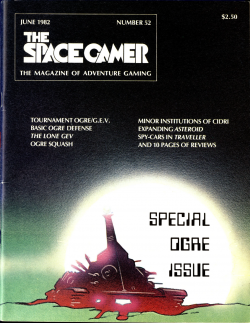 There are several institutions of Cidri, in The Fantasy Trip, which are of some interest to a Game Master, and which become especially important in solo play.

Adolphus the Dull got eaten by a mutant termagant in Death Test XVIII. Rottentooth the Orc picked up his battle axe and Crosseyes the Mage appropriated the two bars of platinum he was carrying. But Adolphus left his $35,920 in savings outside the maze, along with his nifty +1 magic switchblade. The rules say, “The rulers of the area may take a percentage of the estate, ranging from 10% to the whole thing – depending on how greedy and despotic they are.” A scrawled note at the bottom of Adolphus’ sheet says, “Will – everything to Sssis the Reptile Man.” What to do?

The Mercenaries’ Guild regularly acts as a bank for its members. A balance kept in one Hall can be drawn on from any other. Members can leave a will with the Guild, in the not-too-unlikely event of death. When the inevitable comes, the Guild simply transfers the balance from one account to another.

There is no fee for making a Mercenary Will, and local rulers seldom interfere. But the Guild will take 10% of the balance transferred as compensation for this service. If the heir is not a Guild member, the Guild’s share jumps to 50%. (Of course, if the deceased was not a paid-up member, he could not keep a Mercenary Will at all.)

What about the magic switchblade? Roll one die. On 1-4, Sssis will find it among Adolphus’ possessions. On a 5 or 6, it is lost, stolen, destroyed or otherwise gone for good. (If there were several items, Sssis would roll separately for each.)

Larnyx is an experienced wizard with IQ 18. He knows Lesser Magic Item Creation and some related spells, and would like to go into the magic manufacturing business. Having found a laboratory (Advanced Wizard, p. 8) for sale by means of a 5-die roll vs. IQ (p. 38), and having made a reaction roll and purchased the place, he is ready to set up shop, except for one problem. He is going to need a lot of apprentices. The rules say, “The GM plays all ‘hired’ characters.” But no GM is available. How does Larynx get his apprentices?

For every potential great mage in any population, there are several persons of lesser ability. Hence, there is rarely any shortage of apprentices. The Wizards’ Guild Apprentice Exchange in any city always has a sufficiency of competent individuals, guaranteed to reliably supply 25 ST a day. (The wizard, of course, can himself furnish a similar amount.)

A wizard must have at least IQ 12 to hire an apprentice. The Exchange will furnish all the apprentices you need for a fee of $50 a head. Each apprentice must be paid $50 a week. (This figure includes living expenses.) They work on 6-month contracts. If you fire an apprentice for any reason before his six months are up, you must give him $100 severance pay.

An Exchange apprentice will loyally assist in conjurations so long as he gets his pay. He will not go on adventures without a GM reaction roll. Once a year, he may demand a 10% pay raise. Roll 3 dice vs. his IQ. If he demands a raise and doesn’t get one, he will quit (no severance pay necessary).

Normally, you are obliged to teach your apprentice one spell every four months. But this should cause no inconvenience. You can assume he will learn in the course of his employment.

If you want to learn more about your apprentice, you can roll for his race (In The Labyrinth, p. 7). If he is a giant or gargoyle, assume he has IQ 9.

Otherwise, he is a beginning character. Roll one die for his IQ. On 1-3, it is 9. On 4 or 5, it is 10. On a 6, it is 11. His IQ will not normally be higher than that. Of the remaining points to be distributed, assign 1-3 to DX and the rest to ST. Your apprentice will speak your language, unless you speak his. There is a 5-out-of-6 chance he will have Literacy, and a 1-in-6 chance he will have some other talent. (Determine randomly. If you roll up a talent for which he lacks DX or ST, roll again. If you roll up a talent which requires another talent as prerequisite, give him the prerequisite and the talent.)

Every week, roll 3 dice for the apprentice’s job risk at 4/18. If he gets 3 or 4, add one point to an attribute chosen randomly. If he gets 18, he dropped a beaker or such worth $50, which is subtracted from his salary’ and you should make a saving roll for him (ITL, p. 25). As for his salary, you do not keep the books for him. You can assume he finds some good use for the money.

Scrofula the Goblin was minding his own business, practicing his simple trade as a brigand, when he blew a couple of job rolls. By rare good fortune, he survived the 4 dice damage, but now he has only 1 ST left and is in jail. There is no prospect of an expedition to get him out. Should he despair?

Not necessarily. The jails of Cidri have a certain gross consistency. One may expect filth, vermin, rotten food, etc. Justice is slow. It may take months or even years for a case to come to trial.

A character in jail recovers from his wounds at only 1 ST a week. He is considered to be working at a 3/12 job with no pay. If he should roll a 3 one week, add nothing to his attributes but set him free; If he rolls 13 or higher, the usual consequences ensue.

When and if a character recovers completely from his wounds, he can try to break jail. Roll 6 dice vs. his highest attribute. If he fails, roll 5 dice vs. the same attribute, or he takes a beating of 2 dice damage from the angry guards. You cannot try to break jail more often than once a week.

A jailed character can also try to bribe his way out, assuming he has savings stashed away somewhere. First, write down the amount of swag you are offering the guards. (Money only; you can assume any magic weapons, etc., were confiscated.) Then, roll on the bribery table (ITL, p. 28).