From The Space Gamer: Master's Thesis 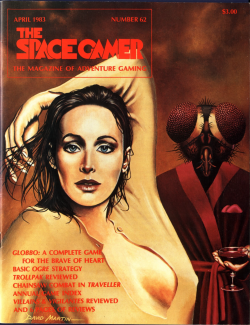 “Where do summoned creatures come from?” asked Melar. “Are they assembled from raw energy like illusions, or do they have real existences in some other place, from whence we snatch them as we need them?”

“I don’t know,” replied Illic, sipping his beer. “Why don’t you summon one and ask him?” Illic’s attention wandered as he glanced around the taproom of the Staff and Scroll, which was nearly empty this late afternoon.

“I know what you’re thinking,” Melar continued. “Why does it matter, so long as they appear and fight for us?”

Illic hadn’t really been thinking that, or much of anything, but he sat up and told himself to pay attention. “Why the sudden interest?”

“Well might you ask,” replied Melar, “for I have finally found a topic for my Master’s thesis. Not only that, I have performed the experiment you suggested, and I’m well on my way.”

What experiment? thought Illic, then remembered. “What, did you summon, a dragon?” he asked.

“Be serious. I’m only a Class 12; who’d let me play with a spell like that? No, I summoned a warrior. You know my favorite archetype, the big fellow with the halberd?”

“Yes,” said Illic, becoming more interested. “What did he say?” 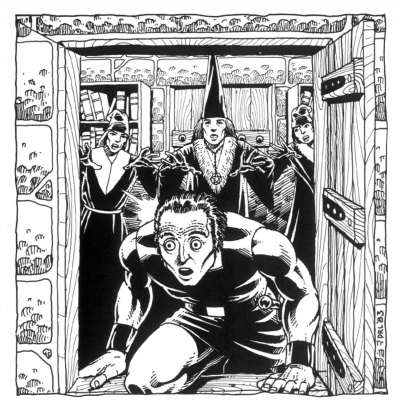 “Not much, actually. He knew he was there to serve me, but everything else was a blank. When I asked him where he’d been a minute ago, he just looked very confused.”

“Hmm,” said Illic. “Perhaps the spell that binds them to our service also affects their memories? That is, if they have a true existence to remember.”

“Ah, but that was just my first trial,” Melar went on. “You know how, when you summon a warrior, you concentrate on strength and dexterity as the qualities you’d like him to possess? Well, it occurred to me, why not concentrate instead on intelligence?”

“Interesting. So you summoned a smart warrior. How did he do?”

“Better. When I asked him what he had been doing a minute ago, he thought about it. He replied that since he existed to serve me, he must have been serving me in some way, though he couldn’t remember how.”

“Logical, at least,” put in Illic, “but still inconclusive.”

“Ah, but at this point I felt I was on to something. I went and told Master Taradel about it, and he said it was a subject worthy of investigation. He wasn’t sure anything would come of it, but he was interested enough to authorize me a section of apprentices and a power battery for a few hours.”

“What did you have in mind?” asked Illic .

“I had two ideas,” replied Melar. “First, that I would summon a warrior and temporarily augment his intelligence by magical means.”

“Such an augmentation spell would last less than a minute,” objected Illic.

“True, but perhaps long enough to get some answers. Second, you know how the imminence of danger can sometimes enable a person to break free of magical control. If I placed him in such a situation, it might shatter the spell that blocked his memories.”

“So did you actually perform this experiment?”

“Yes, this morning. We used the tower room. I made the preparations and cast the summoning spell, concentrating totally on intuition and understanding. The warrior appeared, and didn’t look like any I’d seen before. He was, well, puny. Some of the apprentices snickered. I asked him where he was from, and he said he couldn’t remember. Then the moment came! I ordered him to leap to his death through the window!” Melar paused for a sip of beer. “He turned and put one foot on the sill; I signaled the apprentices and started my own spell. The power of six strong young lads, plus my own, plus all the energy from the battery, hit him as he looked down from the window. He jerked and shivered like a man with an ague, and then he turned and looked at me! The spell was broken!”

Illic looked across the square at the Guildhouse tower. “That’s a long way down,” he said.

“I wish you could have seen his face,” continued Melar. “It was a study in realization, in comprehension. ‘You summoned me to do your bidding, didn’t you?’ he said softly. ‘Yes, yes,’ I cried. ‘Where are you from? Do you remember what you were doing before you appeared here?’

“He didn’t appear to have heard me. ‘So many gone,’ he said to himself. ‘So many vanished, to return hacked and gutted. None remembered, none knew why. But I know.’

“He looked at me then, and there was dark, deep hatred in his eyes. Then, all of a sudden, he vanished.

“A summoned creature vanishing of his own accord!” exclaimed Illic. “I’ve never heard of that before.”

“Yes, but he left behind the proof I needed. He implied that he’d known others who’d been summoned. Therefore, there is a place somewhere from which we draw the creatures we summon.” Melar took a triumphant swig from his mug.

“You know,” said Illic, “someone with that kind of thinking ability could be extremely powerful. And he didn’t sound friendly.”

“I considered that,” replied Melar, “but no one has ever summoned a mage, so the place he’s from must be magic-free. The augmentation spell would have shattered as soon as he returned. And even if it didn’t, the limitation on the spell has expired.”

“But you don’t know all the parameters,” said Illic. “It might be that a return to a non-magical plane would freeze his condition at the instant of return, allowing your spell to hold indefinitely.”

“If that’s true,” said Melar after a moment, “then somewhere there’s a very smart fellow indeed! But I don’t believe it. Besides, if his people aren’t magical, what can they do to us? No, the next thing to do is to repeat the experiment, but include some way of holding the subject here until he answers my questions.”

Illic was on the point of replying when the Guildhouse exploded.