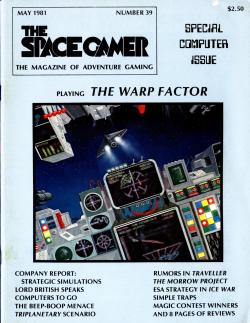 One of the contests The Space Gamer ran, back in the day, was for magic items. Many of the winning entries were TFT-related, and here they are!

The winner was Draper Kauffman, of St. Louis. He sent three items, all ingenious and useful.

The Spell Crystal: A prismatic lens of pure rock crystal, usually worn on a headband, helm, or pendant. It can store the memory of any one Creation spell and repeat that spell at the wearer's command. Power for its spells must come from the wearer (or a ST Battery) at the normal cost. The Spell Crystal can be used in either of two ways: a) to double a spell as the wearer casts it, creating two gargoyles instead of one, for example, or b) to repeat a spell which the wearer has just cast; thus, having just summoned a gargoyle (or two, as in A), the wearer could use the Crystal to continue summoning one gargoyle per turn until he got bored or ran out of ST. The wearer may fight, move, cast other spells, etc. while the crystal repeats its spell, but once the repetition is stopped, the wearer cannot restart it without successfully casting a new spell.

Summon Small Creature: Creation spell. Brings a small non-magical creature the wizard specifies to do the wizard's bidding. Neither ST nor IQ can be more than 6. Useful creatures include cats, dogs, monkeys, slinkers, ferrets, skunks, otters, hawks, bats, dragonets, snakes, scorpions, and so on. Might be: IQ 8, 1 ST to cast and 1 ST/turn to maintain. Note: If the wizard barely succeeds (i.e., makes the maximum possible successful roll), the GM may substitute any creature that is similar in some way to the one specified.

(Note from SJ: Something like this definitely needs to become official, though I don’t know if it should allow for a wide choice of creatures.)

Rod of Aaron: Thrown spell. Might be around IQ 13 in TFT. Costs 3 ST to cast, 1 per minute to maintain. Makes limp things stiff while spell is on. Can be used to tum a vine into an impromptu pole or hook, to tum a rope ladder into a rigid one, to make a rowboat out of an appropriately shaped piece of oilcloth, and so on. Object should be laid out in the desired shape first; a single spell can affect only volumes of 2.5 cubic meters or less. The spell can be used on living things – it is much prized by courtesans, for example – but the cost to maintain it is 1 ST per turn if the target is resisting being stiffened. (A magic item based on this spell would cost about $6,500, should be wand-shaped, and must be touched to the item to be. stiffened; the effect lasts as long as contact is maintained, at no ST cost.)

Rings of Dorian Gray. When each is worn by a living humanoid, any physical change that would normally affect one wearer happens to the other wearer instead. This includes injury, disease, the effects of aging, magically-induced changes (polymorph, clumsiness, invisibility, etc.), energy drain, fatigue and rest, hunger and eating, normal or magical healing, and so on.

If one wearer dies, all injury above that necessary to kill that wearer happens to the one who is actually being attacked. The effect of the rings stops. A ring may only be removed by Remove Curse, Wish, or the death of the wearer.

Player characters may discover either a single ring or a pair. Those finding only one ring from a pair, when the other is worn by someone somewhere else, are likely to end up in unusual situations. For example, they may starve in the midst of plenty, since when they eat the other wearer feels full and doesn't eat. A PC with one ring might wade through melees without being harmed, but only until the other wearer dies, or ends it by “suicide,” which will kill the player character instead.

Someone who discovers or produces a pair of rings may avoid the effects of aging by giving the other to a young person, buy a slave to take injuries for him, and so on. A reverse suicide is always possible, however, so that the player had better either make a good deal or hire some trustworthy guards to watch the other wearer.

(SJ note: I have thought of a couple of non-evil uses for these rings. But only a couple!)

Mapping Potion: Endows user with the ability to sense his location accurately, including his direction and distance from any known reference point, and to remember accurately any path actually taken by the user. Lasts 1 day. Requires the brains of 20 homing pigeons ($3 each), and five weeks to make. Costs $300.

Ring of Direction: When the wearer concentrates on a place that is personally known to him, the Ring will tingle if the finger it is on is pointed in the direction of that place; the strength of the sensation is inversely proportional to the distance. In addition, the wearer may use that finger to trace on a map an accurate rendering of any path he has taken within the past 48 hours while wearing the ring. May also be set in a headband or helm and worn on the forehead, in which case it tingles when the wearer looks in the right direction and allows him to retrace a path with his eyes while walking or looking at a map. It is a lesser magic item, costs $3,000, and takes 3 weeks to make, starting with a gold ring or nugget worth $70 and using 120 ST per day and one dose of Mapping Potion ($300) per week.

(Obviously, there could also be a Location spell – perhaps IQ 11, costing 1 ST per 5 minutes, or something like that.)

Smoke (C)/IQ-12: Fills one hex with thick, yellow, roiling clouds of noxious smoke, extending some 3 meters into the air. A hex may be smoked while a figure is in it. Figures may move freely through or into smoked hexes. A figure attacking from or through a smoke hex does so at a -4 DX; any attack into a smoke hex is at a -2 DX. Any figure which moves into a smoke hex and stops (to attack, disbelieve, etc.) takes 1 hit of Fatigue damage due to smoke inhalation. Any figure present in a hex when it is first smoked must make a 4-die roll vs. DX. Success means the figure held his breath and jumped away into an adjacent hex; failure means the figure takes 1 hit of Fatigue damage. Cost for this spell: 2 ST.

Zone of Silence (C)/IQ-14: This spell creates a magical barrier to sound. A Zone of Silence will prevent all sound of any type or strength from passing through it, as well as any sound originating in the affected area. It will not stop light, insubstantial beings, or in fact anything physical . . . just sound. Basic ST cost is 3 to cover an area within 1 hex of the wizard; range can be increased by 1 hex in all directions for each additional ST point the wizard puts into it. Duration of this spell is 3 turns, but this too may be increased (no matter what its range) at a cost of 1 ST per tum. Example: A wizard wishes to cast a Zone of Silence over an area 3 hexes from his own hex for 4 turns. It costs him 3 ST to cast it, plus 2 ST for extending it an additional 2 hexes, plus 1 more ST to hold it an extra tum, for a total ST cost of 6 ST. If the wizard is killed or goes unconscious, the Zone will lift. The Zone can be adjusted to affect a part of an area, if the wizard so desires.

If a Zone of Silence only partially restricts the “flow of sound” (that is, if sound can still find some path around the Zone), subtract 1 MH from the distance the sound carries for each hex covered by the Zone.

Force Field (C)/IQ 25: This spell will create a magical barrier that will stop almost anything – spells, physical attacks, illusions, images, summoned beings, etc. It does not affect spells already cast, and will not block Demons, astral bodies, or insubstantial figures. When a spell is cast on a figure protected by a Force Field, the wizard casting the spell loses the full ST cost for that spell, because it succeeded but was nullified. Physical attacks against a figure protected by a Force Field are conducted normally, except that no harm is done to the protected figure (no matter what the die roll is). Costs 20 ST to cast, plus 5 ST per turn it is maintained. Range is 1 hex from the wizard's hex; this may be extended at a cost of 5 ST per hex (not per extra hex 0f range ). This spell may NOT be removed by a Dissolve Enchantment, although of course a Wish will remove it. The catches: (1) It takes 5 undisturbed turns to construct a Force Field; any disturbance of the caster costs the wizard 1 ST and forces them to start over. (2) When the first attack is made against the Force Field, the wizard who constructed it must make a 5-die saving roll on IQ; failure means the Force Field is faulty and offers no protection.

SJ note: IQ 25? Well, it is a powerful spell. Nevertheless, if GMs introduce this one, it should not be freely taught by the Wizard’s Guild.

Mobius Ladder: A ladder runs through the center of an open shaft in the center of a room in a dungeon. The shaft extends for three levels, though it seems endless. When someone climbs through the ceiling of the highest level he enters the floor of the lowest level on the opposite side of the ladder and vice versa.

SJ note: It could extend for any number of levels. It could be a stairway or a series of ramps rather than a ladder, with a different “reverse sides” effect. What happens if you are on the ladder and you drop something?