From The Space Gamer: Magic Backlash in TFT 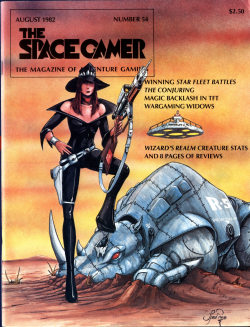 It does a gamemaster's heart good to have a system which allows nasty things to happen during the course of regular events. Players can be pursuing the best possible course and yet run into difficulties beyond their control; there is risk involved in any pursuit. It is helpful if these difficulties are beyond the GM’s control as well, for he is otherwise open to criticism for being the wrench-thrower.

This is the basis for such mechanics as die rolls for proper use of skills. Something might happen beyond the character's control which ruins his plans. Even the highest-level characters in TFT have to deal with the approximate 5% chance of an automatic miss.

This article will describe a Magic Backlash table which lets gamemasters even things up a bit. To use this unofficial variant, add the following rule additions and chart:

3 or less – Caster is stricken mute and suffers to physical spasms, and cannot cast any spells which need gestures or incantations. This affects all spells of the same as or up to four less than the caster's IQ. This lasts for 3d6 turns (optionally, 3d6 days if the spell was cast in other than combat conditions, or treat as a curse which must be re­moved).

4 – Caster is cursed with physical spasms. Caster cannot cast any spells which need gestures. This affects all spells of the same as or one less than the caster's IQ. This effect lasts for 3d6 turns (optionally, 3d6 days as above). If this result occurs to a character already mute, then apply the results of 3, above.

5 – Caster is stricken mute and cannot cast any spells which require incantations. This affects all spells of the same as or one less than the caster's IQ. This effect lasts for 3d6 turns (optionally, 3d6 days as above). If this result occurs to a character who is already afflicted with physical spasms, then apply the results of 3, above.

6 – Caster is stricken blind and cannot see for 3d6 turns (optionally, 3d6 days as above). Apply a -8 modifier to caster's DX in doing anything except casting a spell on himself, cut MA in half, and have the player close his eyes as long as blindness continues.

8 – Caster pays twice the normal ST cost for the spell and falls down. If ST cost exceeds caster's available ST, unconsciousness occurs. All continuing spells cease, but may be recast.

12 – Caster pays full normal ST cost, but spell only takes half-effect. Thus an Iron Flesh spell would provide only 3 hits of protection, missile spells do only half damage, and so on. If the spell cannot be halved in effect, then treat this as 9, above.

15 – Caster's mind is badly shaken. Caster's IQ is temporarily reduced to half its current level (rounded down). Any spells or abilities known above this new level are temporarily forgotten and may not be used. This effect lasts 3d6 turns (optionally, 3d6 days as with a result of 3).

16 – Caster's mind is badly shocked. Caster permanently forgets the spell just used and his IQ is reduced by 1. All continuing spells cease and must be recast to continue. Note that this spell may be relearned just like any other spell is learned.

17 – Caster really backfired this one. The caster is affected by a Curse as per Advanced Wizard rules of 1 d6 level. This acts as a harmful modifier to all rolls until it is removed.

18+ – Oops! Failure caused a rift which allowed a demon to appear as if summoned. See the Summon Demon spell in Advanced Wizard for the gruesome details.

Those results which do not mention the ST expended all take full casting ST and then the results applies. The items this applies to specifically are 3-6 and 13-18.

Players should remember that there is only a small chance per spell that this chart will be utilized. Even if it is, there is a good chance that minor events (ST losses, spell failures) will occur. Don't panic when three sixes come up; there's a price to be paid for the pleasure of seeing three ones.

This chart is meant to liven up the game in unpredictable ways, not to destroy player characters. Gaming the errors to humorous effect can be easy; several of the accidental doings from “The Conjuring” in this issue of TSG can be worked out from this chart, assuming that the GM has an active imagination and an antic sense of humor. Be reasonable in application and magic backlash will become just one of those things which can upset the best-laid plans of adventurers and mages.