From The Space Gamer: Handicapped Characters in TFT 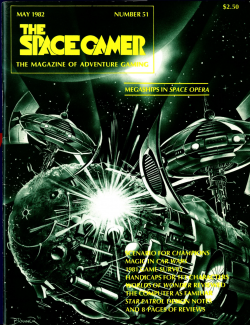 SJ note: As far as I know, this article was the first appearance anywhere of a “disadvantage” system for characters!

That's what it often gets down to. The Fantasy Trip allows creation of personalized characters – you can create a character who spots traps and cracks a whip like Indiana Jones, for example – but if the players want to hack, they hack. Roll-playing replaces roleplaying; the designer’s work is wasted.

One way to make characters more interesting is to give them handicaps. Indiana Jones was afraid of snakes. Captain Ahab hobbled around on a peg leg. Conan kept losing his temper. These things can enhance roleplaying, but they interfere with hacking. A sharp GM rewards roleplaying with an occasional experience bonus, but the easy points come from butchering goblins. Who wants a character that’s afraid of snakes?

Gullible: (“Hey, mister! Look behind you!”) It matters not how outrageous the lie, this character must roll 3 dice vs. IQ or believe it. A similar roll is required if he wants to avoid taking the first offer in bargaining. However, this handicap will have little effect on his combat ability, since few monsters will know about his little problem, or be bright enough to take advantage of it.

Hard of Hearing: (“Eh, what did you say?”) This character must roll an extra die to notice a sound. He will not hear what is going on if the other characters whisper. He cannot learn Acute Hearing.

Miserly: (“Bah! I wouldn’t give you three coppers for that thing!”) A miser must roll 3 dice vs. IQ to part with his money for anything. He will often sleep in a barn rather than waste his hard-earned silvers on an inn. If he misses a roll, he can try again the next day (or week, if he is trying to buy a magic item).

Alcoholic: (“Get that bottle away from Spitsky!”) An alcoholic must roll 3 dice vs. IQ to abstain any time the opportunity for drinking presents itself. Once he starts drinking, he must roll 4 dice vs. IQ to stop. He may roll once after each drink he takes; it is assumed that these are hefty drinks. After consuming a number of drinks equal to his ST divided by 4 (drop any fractions) he will be sufficiently pickled that his resolve will evaporate entirely; he will continue drinking until thoroughly soused. Thus, a human with a ST of 11 or less would get two chances to quit once he started drinking; a character with ST 12-15 would get three chances, and so on.

Once drunk, he will be no good to anyone for 8 hours, and will have a hangover (-2 to all rolls) for 8 hours after that. (It is presumed that the character is a binge drinker rather than a chronic drinker; no modification need be made to employment rolls.

Lame: (“Do we have to wait for Thorbald to catch up again?”) This character suffers a modifier of -2 to his movement allowance, after other modifiers. A lame character cannot learn Running.

Nearsighted: (“Look out! Osmund’s trying to use his bow!”) A nearsighted character must roll an extra die to notice anything what requires vision. He is -2 with missile weapons and spells, and cannot learn Alertness.

Odious: (“I have a better idea. I’ll negotiate with the gargoyles.”) This character is physically or personally offensive. He gets a -1 to all reaction rolls, and cannot learn Charisma.

Oversexed: (“Oh no! There goes Julia again!”) This person suffers from satyriasis or nymphomania. He/she must roll 3 dice vs. IQ to avoid trying to seduce strangers of the preferred sex. A roll of 17 means the attempt is especially crude and gross; check reaction at -2.

Choleric: (“To hell with negotiating! Let’s just clobber them!”) A choleric character prefers violence to talk. He must roll 3 dice vs. IQ to avoid attacking any potential enemy without preliminaries. A roll of 17 means he will also attach anyone who tries to restrain him; 18 means he automatically goes berserk. Once combat is initiated, he must roll 4 dice if he wants to stop hacking while his enemies still stand. A choleric character cannot learn Diplomacy.

Cowardly: (“I’ll make sure no one sneaks up on us from the rear!”) This character must roll 3 dice vs. IQ at the be-ginning of every round of combat to avoid choosing the option “disengage” if engaged and “run like hell” if not. A roll of 17 means he drops his weapons in addition; 18 means he has also soiled his britches.

Kleptomaniac: (“I’ll check the bodies!”) A kleptomaniac must roll 3 dice vs. IQ to avoid stealing something every time the opportunity presents itself. (If he is on a long expedition with a group, check daily.) It does not matter that the object is of little worth, belongs to a friend, or is completely useless; a klepto will steal anything. A roll of 17 means he must try to steal two items; 18 means three attempts. One small advantage: it costs a klepto only one IQ point to become a Thief. (He already is, competent or not!) A kleptomaniac sometimes feels guilty afterwards; let him roll 3 dice vs. IQ to give back whatever he has stolen. He only gets one try.

Note: When a kleptomaniac fails his roll, indicating that something is to be stolen, success is not automatic; he must still carry off the theft, using any Thief talent he possesses. If caught, he may attempt to use Charisma, Diplomacy, etc. to explain it away.

One-Armed: (“No, I don’t want to buy a shield!”) If he is a hero, he can only use one-handed weapons. A one-armed wizard is effectively limited to spells at least two points lower than his IQ. (Higher ones require gestures with two hands.) Note that a one-armed wizard can use a staff in combat, but does not benefit from the Quarterstaff talent.

One-Legged: (Thump, thump, thump.) This character is presumed to have a peg leg. He moves at half his normal MA. (A human in leather moves 4.) He can learn Running (which increases his MA by 1), but cannot learn Silent Movement.

Blind: (“You say you want a helmet with no eye slit?”) A blind character is in darkness all the time.  He has no chance of noticing anything which requires vision. However, he gets Acute Hearing free, regardless of his IQ, and he can move his full MA. Even so, he is at -4 to hit, or perform any other task that requires hand-eye coordination. A blind wizard cannot benefit from Dark Vision, Mage Sight, or other vision-oriented spells, though he can cast them on others. He cannot use any creation spells except Fire, Rope, and Shadow, and obviously, he gains no benefit from scrolls or magic books. (They haven’t heard of Braille on Cidri.) However, he is at no DX minus for the creation spells he can use, for self-targeted spells, special spells, and spells cast on something he can touch. (You usually cannot touch an enemy in a combat situation; he won’t let you.) Also, blind characters are in no way inhibited by Blur, Darkness, Dazzle, Shadow, or Invisibility.

Hemophiliac: (“Medic!”) A hemophiliac takes an extra hit from every attack which penetrates his armor. Moreover, he will take an additional hit point per minute per wound until he is attended by a Physicker or dies.

Moronic: (“Duh.”) This fellow starts with IQ 7, and can never raise his IQ except by magic. He has trouble tying his shoelaces. Sometimes a moron is an idiot savant; a moron can learn any one talent of IQ 8 or higher by paying twice the usual point cost. Morons also pay double to learn languages; they cannot learn spells at all.

Pacifist: (“Look, that slime will leave you alone if you leave it alone!”) A pacifist is possessed by high moral principles. He will never initiate combat, and some-times will not even fight back if attacked. He must roll 3 dice vs. IQ every time he tries to make an attack which does damage (pins, shield rushes, etc. do not fall in that category). If he fails his IQ roll, he can change options and dodge or defend. However, a rollof 17 means he will attempt to disengage if engaged; 18 means that he will stand meekly and try to explain things to the enemy while it attacks.

Fat: (“How come the monsters always want to eat me?”) A fat character gets one bonus creation point for every 4 encumbrance points of fat (8 for dwarves). Fat encumbrance is permanent, and is cumulative with carried encumbrance. However, it does have one small advantage – it doesn't count for swimming. Fat people tend to float.

Neurotic: (“Why did it have to be snakes?”) There are many kinds of neuroses, but phobias are the easiest to handle.

Points would range from 1 for a mild phobia (fear of snakes) to 3 for something radical (general xenophobia). See Call of Cthulhu for a useful list of phobias. A phobic character must roll 3 dice vs. IQ upon encountering the Terrible Whatever. A miss means he flees in panic (and may roll 4 dice vs. IQ per round to re­cover). A 17 means he drops his weapons and flees; 18 means that he does not drop his weapons or flee, but attacks with berserk fury!

Old: (“I warned you youngsters what would happen if you picked a fight with a dragon!”) Some people don’t start adventuring until late in life. For each 10 years of age above 20, allow the character one bonus point for creation purposes.

In real life, you don’t get to choose your handicaps. If the GM prefers, he can decide how many handicaps to allow a player-character, and then let him roll five dice for each:

History: Caiaphas always wanted to be a warrior. He was a very promising student, outshining the other boys on the practice field: that is, he outshone them until an accident left him crippled, lame and weak. Apprenticing as a wizard rather late, he did not learn all the spells his intelligence would allow. However, he retains skill with the whip, one weapon he can still use in his present condition.

Personality: Caiaphas cannot get it out of his head that he was crippled deliberately in a faked accident. He is a bitter person, and treats heroes condescendingly.

History: Slyhock is small, even for a Halfling. He learned early that there were two ways he could deal with larger folk – outwit them or outrun them. Practicing both arts, he left home shortly before the new owners came to take possession of the Brandywine Bridge.

Personality: These days, Slyhock makes his living as a dealer in valuable objects of mysterious origin; in other words, as a fence. He generally prefers to let other people take the risks, but he can usually put on a brave face when his greed is aroused, or when he feels personally threatened.

History: Gerta was a talented opera singer until a sandbag fell on her head during a performance of Die Valkyrie. The brain damage was irreversible.

Personality: In her own mind, Gerta is a glorious Valkyrie. The fact that other people consider her a drooling idiot does not seem to enter her consciousness.