From The Space Gamer: Featured Review - The Fantasy Trip 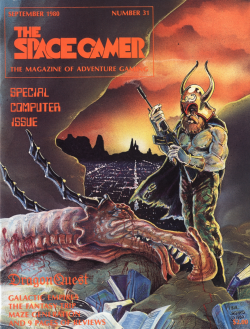 Ladies and Gentlemen, Boys and Girls, here it is. It’s stupendous, it’s colossal, it’s the greatest fantasy role-playing game on earth! Presented by Metagaming, designed by Steve Jackson, in the year 1980 . . . The Fantasy Trip! (flourish of trumpets).

This is Metagaming’s long-awaited FRP game, designed for a game master and any number of players. It consists of three 8½” x 11” rule booklets, each costing $5, with identical pictures of fantastic adventurers on each cover. In The Labyrinth, the Game Master’s module, has 78 pages. Advanced Melee, the combat rules, has 32 pages. Advanced Wizard, the magic rules, has 39 pages.

Those who recall the mutually incompatible Original, Basic, and Advanced versions of another, extremely popular, FRP game may feel that there is dirty work afoot here. Is Metagaming attempting the same type of skullduggery, marketing the same games twice? Not really. The originals are just that, stand-alone Microgames. They can be part of The Fantasy Trip if you don’t want to buy the Advanced versions, but only because they’re so well-designed themselves. The Advanced Melee and Wizard books make no claim to be games; they are just part of The Fantasy Trip.

This puts the game in a bad price range. At $15 it isn’t anywhere near as expensive as Advanced Dungeons and Dragons (a game whose price, scope, size, and complexity put it in a whole different league). However, it is slightly more costly than the basic versions of Chivalry & Sorcery, Runequest, or Tunnels & Trolls. “Worth the money” is a subjective evaluation; the price differences are small enough that The Fantasy Trip can be honestly considered a competitor. To me, it is a very good one. The game systems pioneered in the Microgames were playable, fun, and adapt well to their expansion and improvement. Does The Fantasy Trip do anything that Runequest doesn’t? Honestly, no. The latter also has a far better developed background world and a seemingly more realistic combat system. However, it requires a lot of time, attention and numerical figuring. The Fantasy Trip offers as much scope for gaming, better playability, the magic system is just as “realistic,” and, most important, you can keep track of what the characters are doing without the arithmetic.

The problem, again, is price. Someone who had played the original D&D, and was looking to start his own FRP campaign, might have purchased Runequest or Chivalry & Sorcery because they offered coherent games with better mechanics than D&D. Adding the supplements made D&D better, but also more expensive, and the Advanced version was more expensive still and wasn’t published as a full campaign game one at a time. So someone who wanted that, wasn’t satisfied with Original D&D, and didn’t own a money tree went out and bought one of the other games. The Fantasy Trip isn’t cheaper than they are and didn’t come out until they were established.

Having stated the foregoing economic facts, let me say if you missed it the first time – that The Fantasy Trip is very, very good. Good enough to be competitive.

In The Labyrinth tells you how to create Warrior or Wizard characters, set up dungeon adventure maps, learn and use talents for adventuring, gives the background of Cidri – the world where the action takes place – and describes the various humanoids and monsters. There are rules for encumbrance, character reactions, traps, and how the various talents are applied in an adventure. There’s a brief foray into economics (did you ever wonder how much a wizard can make washing dishes if he can’t get a magic gig?), sample dungeon and outdoor maps, and sample character record sheets.

Advanced Melee covers movement and combat options, various contingencies a character might face such as climbing, swimming, and ambush, various optional additions to the combat system – specifically designed to add a realistic feeling but slowing play of the combats – and there is even an optional combat system for faster, less complex play.

Advanced Wizard describes different types of spells, use of magic in conjunction with the combat system, and rules for characters to create magic potions and artifacts. Each of the rules booklets has a page or two of sample hexes which can be photocopied for an unending supply of gaming arenas.

It is the hexagonal-spaces game “board” which makes The Fantasy Trip unique. Unlike other RPGs, it is designed to be played with pieces moved on a board. The board consists of linked hexagons, each representing one and 1/3 meters; the pieces are anything which indicate individual characters. Most people use 25mm metal figurines, sold by many different companies. Whenever a situation arises where distance is important, and that usually means combat, markers are put on the board at the appropriate distance from each other. All movement and weapon ranges are given in terms of the number of hexes separating characters. In this way are resolved the questions of who could perform certain activities at certain times during the hostilities between characters. All games have some sort of movement criteria, usually expressed in scale inches, but The Fantasy Trip fully develops the use of a board to completely define the operational limits of the characters. This might seem limiting, the kind of thing you took up FRP to avoid, but it actually makes the game far more workable. Gone are the disputes between the players and Game Master in which the former claims the characters were out of position or didn’t have enough time. There is now a graphic, discernable basis for ongoing actions which increases rather than limits the fun. Those who can’t stand the idea of a board in FRP can simply convert “hexes” to inches and play on any surface, even actual scale-model terrain. The other unique feature of The Fantasy Trip is use of the basic characteristics of the characters to resolve situations. Every character has Strength (ST), Dexterity (DX), and Intelligence (IQ); every special action attempted depends directly on these. You roll a certain number of dice and if the number is less than the parameter being tested then the action was successfully undertaken. Thus, to kick open a locked door requires rolling 5 dice to generate a number less than or equal to the character’s ST, to walk and chew gum at the same time requires rolling a number less than the character’s DX (only kidding, Steve, put down that battleaxe), and so on.

ST, DX, and IQ are selected, within limits defined by the rules, and they may be increased as the player achieves experience for slaying monsters, avoiding traps, casting magic spells, and otherwise performing heroic deeds. There may come a point where a character can do nearly anything, nearly any time, a problem in many roleplaying games. The only antidote is an imaginative Game Master arranging more perilous situations requiring higher amounts of dice to be rolled, or situations where the player must figure out the solutions.

The use of only three basic characteristics may seem overly simple-minded to those who are used to a character having six, eight, or more, and even then have various charts and tables to resolve combat, magic, and special situations. If that’s the way you feel, you won’t like The Fantasy Trip no matter what it offers. To some extent, I’m one of those people. But The Fantasy Trip must be evaluated by the criterion "Does It Work?" Yes. It allows absorbing; interesting, fascinating play, by an elegant system which is easy to use and doesn’t sacrifice too much of the character identification that comes with elaborate sets of basic characteristics that are rolled in other games.

There are faults in this game, no doubt about it. The static "you-move-then-I-move-then-we-strike" is a holdover from Microgaming wherein a balanced tactical system was more important than simulating the fluid motion of a real duel. There are facets of play that are glossed over (personality, size, and reactions of different characters). Some monsters are too stereotyped and limited in their options (“Uh oh, it’s the Giant Amoeba; we’ve got one roll to hit the nucleus before we’re engulfed.” “Uh oh, it’s an Apep; we’ve only got a chance to run or fight because he won’t talk to us.”)

The absolute worst, and inexcusable, fault is the total lack of organization. Rules are scattered hither and yon, with no index to give you a clue. In The Labyrinth has an inadequate Table of Contents, the other booklets don’t even have that. It should have been easy enough to preserve the presentation sequence of the Microgames rules and insert the Advanced rules to be playable as Microgames. It also states on the first page of the two Advanced rules that they aren’t stand-alone games, but even though Metagaming wanted to preserve that difference, it wouldn’t have hurt to have had as clean and organized presentation in the FRP modules as in the Micros. The Fantasy Trip was a long time in coming, in that time there could have been a lot more attention to detail and presentation. Coming late in the current cycle of interest in FRP, The Fantasy Trip needs every advantage it can get.

The Fantasy Trip is an excellent FRP game system. I’d have liked it to be better organized and a few dollars cheaper. Those who purchase it anyway will be very glad they did.