From Fantasy Gamer: Where We're Going 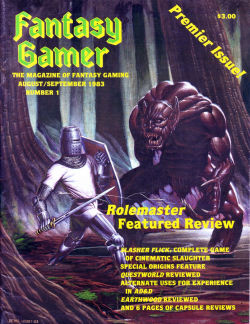 I had intended to write this column only for Space Gamer after the magazines split, and confine my Fantasy Gamer participation to articles. Well, that resolution didn't last long. But I've got a pretty good excuse. The subject I want to write about is one of particular interest to fantasy fans — and not much interest to sf specialists. I'm talking about The Fantasy Trip.

For the past month — ever since Metagaming's demise became common knowledge — I've been getting letters and even phone calls about TFT. A typical sample:

. . . I'd like to encourage you to bring your loyal magazine readers more material on TFT, since you are the true designer ... This leads me to a plea for help. Now that Metagaming is no more, and now that TFT is up for grabs, it would do both you and many TFTers good, . . . if you could buy your TFT back. I'm sure that you and your little elves could give Melee and Wizard the attention they need. We all know TFT is (or was) the best FRPG on the market. As Princess Leia said, "You're our only hope!"

PS: Any details on your possible RPG? I'm looking forward to seeing more from your company

Okay. First: Thank you, Glenn, and pardon me for singling you out — yours was just the most typical letter to come in on the day that I decided I had to write a column about this.

Second: We would definitely like to see more TFT material for Fantasy Gamer. I'm contractually bound not to run any "errata" type articles (which is all right with me; I covered all the errata that I know about in Space Gamer No. 29 (posted here)). Any other article — scenarios, variants, what-have-you — would be of interest. Scenarios should be short, though, since the featured scenario in each Fantasy Gamer is supposed to be "generic" — that is, adaptable, with a little spadework by the GM, to any system. But by all means, send in TFT material!

Third: Although many people have urged me to buy back TFT (or even "take" it back!) . . . it's not that easy. I can't just "take it back." Though the copyright was originally in my name, it was sold to Metagaming. Metagaming now owns all rights to the trademarks TFT and The Fantasy Trip, and the copyrights to the existing rules system. Just because the company is defunct, that doesn't mean the system is "up for grabs." The TFT titles are for sale by the former owner of Metagaming. The asking price is well into six figures.

I don't have that kind of money — and I doubt that any other publisher does, either — not for a system which, good though it may be, is one among many. Because I agree that it would be a shame for the system to die (and because I'd personally like to bring it back), I've written Metagaming with an alternative proposal involving a reasonable royalty. By the time you read this, I'll either have finalized an agreement, or given up trying. Next issue I should be able to tell you what happened.

If the basic TFT books aren't republished fairly soon (by SJ Games, or someone else) the system will be, for all practical purposes, dead. Gamelords still holds a license, and may release new material. Magazines will still run articles and, of course, there is the possibility of someone doing unofficial designed-for-TFT supplements, similar to the D&D material Mayfair is producing. But if the system stays out of print very long, its fans will move on to other and newer games. So it goes.

Fourth and last: I have not given up on the idea of a new RPG. But it takes a long time to finish one — and I have a lot of demands on my energies right now — and, as I mentioned, the market has enough RPGs already. If no deal can be made on TFT, I'll keep working ... but, when it's finished, the new game may very well go on the shelf. It will be a minimum of eight months before a new system could appear.

My thanks go to everyone who's been asking me these questions. I wish I had answers that you (and I) liked better.

To enjoy all six issues of Fantasy Gamer, visit Warehouse 23 to purchase the magazine in PDF.