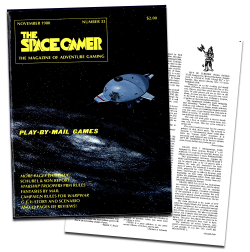 “Solo” means that you can play it by yourself, of course, but these adventures can also be played in groups, with or without a GM. Either way, you’ll be doing well when you get a character out alive!

Death Test was the first one; it came out in 1978. The story: A powerful ruler, the Thorsz, wants to recruit guards . . . and he wants them to be tough. So he sets up a testing labyrinth. If you can get out alive without showing cowardice, you’re hired.

In format, it was a linked series of rooms, each one (not coincidentally) the size of the Melee map. Players entered a room, fought, and then (assuming they survived) decided where to go next. Death Test was intended for fighter characters.

Death Test 2 followed in 1980. The setting was the same, but the story was a bit different. The Thorsz was annoyed because word had gotten around how to beat his dungeon So he had it remade, tougher than ever. Death Test 2 was twice the length of the original, and fans liked it. Ronald Pehr’s review in Space Gamer #33 said “Death Test 2 is a lot of fun. Instructions are coherent, explanations clear, and the adventure can be incorporated into an ongoing Fantasy Trip campaign. Complete knowledge of the labyrinth is slow in coming, but even after you've played several adventures and have practically memorized the instructions, the fascination remains.”

The two Death Test adventures will be part of the TFT Kickstarter campaign – reaching stretch goals will include them in the box at no extra cost, complete with new game counters by Liz Danforth.