Beyond Warriors and Wizards: The Clerical Character

Melee is for armed/armored fighters. Wizard is for those who let magic do their fighting for them. But there is no reason to stop there. With no real “character classes” to restrict you, and the Talents system from In The Labyrinth, you can create a character who is tailored for pretty much any sort of role you want to play.

The Fantasy Trip loosely divides characters into those who spent years learning magic (Wizards) and… well, pretty much everyone else (Heroes). But these aren’t character classes — they just say whether you spent time and effort in learning arcane knowledge. Since anyone can learn a little magic here and there, there’s a lot of overlap, too.

The usual tropes of European Medieval Heroic Fantasy are all easy to model in TFT. Let’s take a look at one of the classics of fantasy fiction and roleplaying, the cleric.

The “cleric” can be part fighter, part scholar, part pastor and part wizard. (No? What is calling on the divine powers for miraculous effects except another sort of magic?) With ITL, you can emphasize any of those. Be a holy crusader who battles heathens with a sword and armor . . . or a priest protecting the world from the hordes of Hell. Either can be primarily Wizards doing their magicking by calling upon their divinities. They can also be non-Wizard types who look at magic itself as being unholy. Some magic in TFT can come from interactions with “demons,” so they may not be too far off.

Priests are also popular because they can be the last hope of an otherwise dying or dead member of the party. True resurrection is outside the scope of player characters performing this sort of ritual on the fly. Even so, a priest in the party might be a link to a religious order that can occasionally call upon their gods to return a dead person to life, if that person was acting in a holy cause.

Player clerics may summon “the aspects of the gods” to enhance the strength, speed and durability of their companions. They don’t necessarily need magic to be useful. They might instead be physician/clergy who are trained in herbal and folk medicine learned treating the wounds of crusaders. These might, in extremes, call upon their gods for occasional aid, but they are primarily Hero-types.

One “cleric” is a character type to itself — the Eastern fighting monk. Raised in monastic isolation, they practice the arts of unarmed combat and use of farm implements and other “harmless” tools as weapons because the invaders allowed only their own soldiers to possess arms and armor. TFT’s In the Labyrinth is equipped “out of the box” to handle such characters. Will you be a humble, silent holy monk who is forced to put aside the mantle of peace to defend a village? In such a cause, you might be able to face a lightly-armed fighter — or several — down with only fists and iron discipline. Add a few Wizardly abilities and you may be able to summon your chi to increase might and speed, or make your body “like unto a thing of iron”. 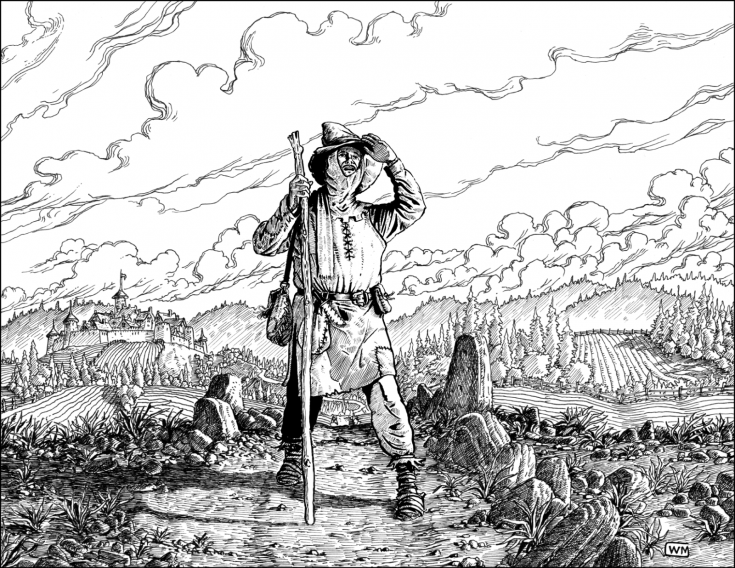 Clerics can have a darker side, both as foes of the player characters or — the gods forbid — morally questionable members of the party itself. As a wizard-type, a dark priestess can curse her enemies, or summon minions of Hell such as shadowy wolves who hunt silently by night, dark fighters whose eyes glow red, and even winged monsters who swoop from the skies.

Bad clerics don’t even have to have mystic powers. A brooding, ruthless Cardinal with church-filled coffers of gold and enough political power to hamstring the King’s loyal Musketeers can be a massively effective villain.  You might be members of the Cardinal’s Guard, a gig with both rewards and dangers. Walk a thin line between furthering your master’s schemes and openly defying the King’s Law. How much do you trust this powerful patron not to sacrifice you as a pawn in his plan?

The Eastern traditions have their own minions of the dark, too. Renegade fighting monks who abandon the pursuit of peace and a selfless life of service may take their skills into the secular world to sell their services as thieves or ninja guards and assassins. They might hold ambitions of their own to take power, or just be bullies who strayed from the path of humility and must be thwarted to maintain the purity of the arts taught by the Order

Whether you carry the Cross before you into battle, call upon your pantheon for strength and enlightenment, or serve dark demon masters, you can find a lot to do in the clerical life with In the Labyrinth. Go forth!

To discuss this latest article for use with The Fantasy Trip roleplaying game, please join the conversation on the forums. To join in and support the project, visit the Kickstarter page today.