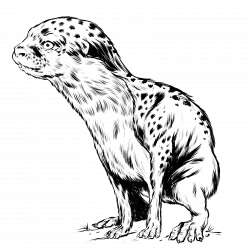 As the $97.5K stretch goal, here are five more new creatures for your TFT campaign. We lead off with Rick Hershey’s excellent artistic take on the Scum Bunny!

Rabbit-sized swamp dwellers, more like nutria than rabbits, but with a distinct hopping gait. They eat water plants and carrion, and reproduce even more rapidly than real rabbits. Fortunately, they are preyed upon by everything larger, in both land and water. Uncle Teeth loves them, and wildcats find them easy meat.

Their brindled green-and-brown fur is good camouflage: -2 to spot them even out in the open. That fur is water-repellent, and makes ugly but effective camouflage clothes or raincapes which give a human wearer -2 to be seen in the swamp or forest.

They are usually harmless, but they do eat carrion, and when their population gets out of hand, a hungry mob might attack a wounded traveler or a child, doing 1d-3 damage with blunt teeth in strong jaws. ST 2, DX 12, IQ 4, MA 12.

Huge crustaceans with two big walking legs and two smaller “arms,” each with two or more sets of pincers. The torso is heavily armored and the eyes and mouthparts are set at the top. The overall effect is of an armored humanoid, ranging from child-sized to bigger than most humans. However, they’re just crabs. They are not intelligent. ST 3 to 12, DX 10, IQ 3, MA 8 in either land or water. A small crabman might have DR 1 and do 1d-1 damage when it hits with a pincer, and can strike with both arms each turn. Large crabmen could have DR 2 or even 3, and do up to 1d+2 damage with each “hand.”

Crabmen forage along the shore in small groups, eating whatever they can find. That will certainly include you if you can’t escape or defend yourself. On the other hand, crabmen are yummy, boiled or raw.

The ordinary wolverine, perhaps 50 pounds of ferocity, is a small, solitary beast. The giant wolverine, found in dark, chilly forests in some parts of Cidri, is a genuine monster.

Wolverines are deadly hunters but get a lot of their food by chasing other predators off their kills. Giant wolverines behave the same way, and will steal a kill as small as a rabbit, apparently just because they can. A really big bear, or a pack of dire wolves, or a cold-weather carnosaur, or a large dragon, could face down a giant wolverine. Sometimes.

The pelt of the giant wolverine is warm, attractive, and sheds frost. Even a damaged one is worth $3,000 or more. Few are the hunters who can bring in an undamaged pelt.

These are small, long-limbed apes, about the size of a cat. They live in the forest in bands of several dozen, and hunt by dropping from trees onto their prey. Their saber-like canines help them hold on, and with their long arms and clever hands they hobble the prey’s legs, strangle it, pinch its nostrils, attack its eyes, and so on. They usually attack things like deer, but the young of any species, including human, may become prey. They won’t engage in a pitched battle; they melt into the trees to look for easier pickings elsewhere.

They have dappled brown fur, with a slightly darker ruff of hair around the neck, and are very hard to see in a tree even when there are many of them.

Mobbers do not make good pets; they don’t bond well with humans, and they bite (1d-2 damage). A mobber might have ST 3, DX 16, IQ 6, with MA 8 on the ground but at least 10 swinging through a canopy of trees.

A dead mob ape can substitute as the main ingredient in a Telepathy potion, and is therefore worth $150 to the Wizards’ Guild. There is speculation that the apes are telepathic among themselves, which would help coordinate their attacks, but they are not a mass mind; they quarrel among themselves and even fight over food.

Little is known about this family of jumping spiders, which range in size from smaller than a coin to bigger than a big dog. Maybe larger . . . someone who encountered a really big gate spider might not come back to tell the story.

The gate spider weaves a roughly circular web . . . not an orb, but an open circle. Usually, but not always, the spider silk glows. Some spells use it, but it is easy to “farm” little gate spiders, so this is only a common ingredient, not something you would go adventuring for.

As its name suggests, the spider’s circular web is actually a magical Gate leading to another web circle in its lair. The rule of this gate is usually: The spider can go in and out. Other things, if they fit, can go in but not out.

The stats and poison strength of a gate spider are normal for a spider of its size, and are left up to the GM. Remember, though, that this is a jumping spider. It is smart, as spiders go (IQ 4) and it can move quickly over short distances.

Stories claim that the survivor of a gate spider bite will gain some sort of affinity for magical Gates. This has never been proven with bites from the little spiders, and it is hard to find volunteers to be bitten by giant spiders for Science.