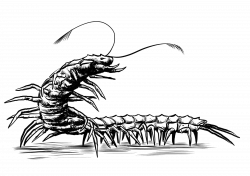 As the $32K stretch goal, here are five new creatures for your TFT campaign. You will notice that there are actually six creatures here. “Deer” is a freebie, because it’s not exactly a “new” creature, but there are many kinds of deer (more on Cidri than here, of course), and they’re very important to wilderness campaigns. And they set the stage for the Sideways Deer . . .

This is a real creature: a giant centipede. On Earth they grow up to a foot long. On Cidri, some species reach at least three feet . . . perhaps more.

Scolopendra is a fast-running predator, at home on the ground, in the trees, and (for at least one species) in the water. Most types hunt by night and hide in a crevice during the day.

One bite from a Scolopendra can cause intense pain and swelling even from a creature only a few inches long. Big ones are very dangerous.

They are not insects, but any spell or chemist’s potion that works on “bugs” will work on a Scolopendra.

Fortunately, they are lone hunters. They don’t attack in swarms. As far as we know!

Only a giant is likely to attack a human, but one of any size could bite you if molested or just surprised.

The effect of the bite depends on the size of the creature. Even the largest ones cannot bite through cloth armor, but woe betide you if one finds unprotected clothing or flesh. The damage is from the poison, not the tiny fangs.

Rumor (heard often enough that it may be true) – The Scolopendra have poison in their legs as well as their fangs, and if one bigger than a baby simply runs across bare flesh, you will feel intense pain and lose 2 DX for an hour.

Scolopendra are often brightly colored, and the pretty ones are in demand as exotic pets ($50 for a baby, $200 for a small one, and it’s a seller’s market for anyone who can catch a big one undamaged). Their poison is also a spell ingredient.

Extinct in our world, these creatures are like giant armadillos. Not dangerous unless attacked, except during the mating season, when anything with a hard shell (which definitely includes armored knights and warhorses) might be seen as competition or, worse, as a love interest.

Even in our world, there are dozens of types of deer and antelope. In Cidri, which was populated from hundreds of worlds, the number of creatures in this “niche” is unknowable.

Deer are herbivores, some grazing and some browsing. They are primarily hunted for their meat and hides; most deer flesh is gamy but palatable, and deerskin makes fine leather. A few deer, like the Arctic reindeer, have been domesticated as herd animals or even beasts of burden.

Depending on the species, deer may be solitary, or found in small “harems” with a male and a few females, or occur in great herds.

Most deer grow antlers, usually on the males only but sometimes on both sexes. These are shed annually, unlike the permanent horns of other herd animals. Some types of horn are valuable as tools or an artistic medium; polished horn is beautiful.

Deer range widely in size. The tiniest weigh only a couple of pounds when adult; the largest, like the extinct Irish Elk of Earth, might stand 7 feet at the shoulder and have antlers of more than 10 feet from tip to tip.

Deer typically have ST depending on their size, DX of 10 to 12 (more for the small ones), and IQ of 5. MA is highly variable; some mid-sized deer are very fleet indeed, with MA 20 or more.

A few species of deer are notably ill-tempered, but most are dangerous only during “rut,” the mating season. Some species have small tusks, and even those that do not have tusks can bite; damage ranges up to 1d+2 for the biggest deer! And of course they can kick, stomp, and charge with their antlers, though a head-butt is more likely to knock a victim down than do any huge damage.

These are almost certainly a real thing, but nobody understands them. From the side they look like regular medium-sized deer, with a faint brown-and-white stripe and modest antlers on the males. But if they see you, they turn to face you, and they vanish to nothing. You can’t see them at all from the front or back. Some hunters report that they can be slain by arrows like regular deer and make a nourishing meal; others insist that accurate shots pass through them without effect. Shed antlers which seem to be from Sideways Deer are known; they show no strange properties once shed, but they have been valuable in making magically sharp weapons.

There are two creatures called “banshee.” One is undead: a screaming or wailing ghost. Some say that the banshee is mourning its dead, others say that it is predicting a death or warning of danger. The wail of the banshee is terrifying but the spirit itself is harmless, and usually indifferent to what mortal beings may do.

The “natural” banshee is named after the ghost. It is a giant bat whose high-pitched cry is just low enough to be heard, a regular repeating keening shriek that goes on and on and on.

Like most bats, it is nocturnal, but it comes out before the sun is fully down. They are graceful, active fliers, usually colored a warm brown with a white mask across the big eyes. The banshee feeds on the wing, grabbing small birds and giant bugs, but can also stoop like a hawk to catch prey the size of young rabbits or scum bunnies. It roosts in small groups in old towers, tall trees, and similar places – they are too big for most caverns.

They would never attack a human. Economically they can be a minor nuisance; if banshees are in the area, the peasants have to get the chickens in before evening! It is best not to trouble a banshee if you find one in daytime; it might be sick, and some bat diseases, like rabies, are contagious to people.

There are always tales of giant bloodsucking banshees that can drain a cow in ten minutes. These are probably just stories. There are also stories of human vampires that turn into banshees. These have their roots in truth, since vampires can levitate!

These are thumb-sized stony-shelled insect-like creatures, perhaps related to Stone Beetles. They can actually “chew” stone to make their tunnels; magic is involved. They eat organic trash.

Stonemasons live in hives, like bees . . . and like bees, they can build homes for themselves. Instead of wax, though, Stone Beetles redeposit the stone they have chewed. They create very finely worked small tiles in perfect squares, hexagons, and triangles. The color depends on what the beetles has been eating and what the hive “wants.” They use these to face their tunnels and sometimes to build exterior structures. They bind them together with a waterproof organic pitch, which they can easily remove if they want to rearrange their building.

Stonemasons can be a nuisance if they are burrowing into your castle wall, but they are hard to eradicate because the hive has no queen. Any adult beetle, apparently, can lay a few eggs and raise young. But they do not like living in small groups. If two hives are close to each other, they will unite. The ones with the less impressive structure (which may still be the larger hive) will abandon it and join the better builders, where they will be welcomed. Only when a hive is very large, with an exterior structure the size of a wagon, will it divide into two, sending a line of stonemasons carrying tiles and especially tasty nuggets of rock to start a new hive at a good distance.

The economic value of stonemasons is in the beautiful tiles they create, some glass-smooth and others faceted or figured in alien ways. These are almost as hard as diamond and can be used to decorate anything that can be enhanced by stone or jewels.

Some entrepreneurs “farm” stonemasons, feeding them, bringing them interesting stones, and carefully collecting the tiles without disturbing the hive too much. A half-dozen big hives can make a decent living for a small family. If you have a jewel mine, it’s good business to give the rubble to stonemasons and see what gem-tinted work they produce. Good stonemason tiles are worth $100 a pound, and prime well-matched tiles in bright colors can bring ten times that much.

The hives do not fight each other or hunt for living food, nor do they present much danger to an intruder. Someone attempting to destroy a hive will be attacked as if by a swarm of ants, but stealing a few dozen tiles from the outside, especially if done by night, will cause no great indignation.

Stonemasons will not penetrate metal, but they will, quickly or slowly, chew through stone (even diamond), glass, or any lesser material.

They have MA 1 trundling along the ground. They have only insect intelligence. Even the whole hive is only as smart as a hive of bees – that is, it can sometimes seem very clever, but it’s all instinct. The one exception is the stonemasons’ aesthetic sense, which is close enough to ours that we can’t help feeling that the stonemasons are deliberately creating beauty.