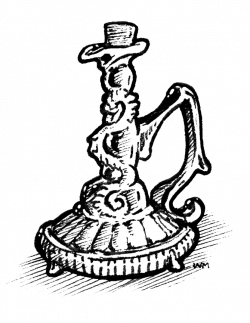 As the $24K stretch goal, here are five new magical items for your TFT campaign. Visit the Kickstarter page today to support the project and unlock more stretch goals!

To avoid creating a short but complex table with long footnotes, creation stats for these items are given by comparison with items in the existing edition of Advanced Wizard.

In appearance, this is a wooden ladder, no more than 12 feet long, and painted bright red. Its magical property is that, when placed on the floor or ground at an angle, it will stay in place as though it were leaning against a solid wall.

Such a very useful item would be common if it were not so hard to make, but the going rate is $10,000! As it is, most builders find it easier to use a mundane stepladder.

But the Red Ladder is superior, when you can get one. It is always completely stable and will never fall by accident. It will hold at least 350 pounds; if loaded to more than that, it will slowly sag to the ground rather than falling or breaking. (The actual break strength of the Red Ladder depends on the mundane wood from which it is made.) Anyone standing on the Red Ladder rolls 1 fewer die for any attempt to stay standing – if, for instance, a wind comes up or an arrow strikes them.

To take the Red Ladder down, you must simply take hold of it with the intent to move it. You cannot do this if someone is on the ladder, of course.

Creation is as per a 2-hex Magic Carpet, except that it requires a dose of Flight potion ($1,200), four soft-boiled Bare Owl eggs ($50 each, to be eaten by the wizard, so don’t neglect the spices), and $300 in common ingredients.

This magical torch requires as raw material a stick of well-aged wood about 2 feet long.

When it is lit – and even a spark will light it – it burns like a torch over about half its length, and remains burning until it breaks or is broken, or a holder commands it to go out, or it is extinguished by a surfeit of any element:

• Earth – bury it in earth for at least five minutes.

• Air – blow it out with a force greater than all but the greatest storm, which is impractical.

• Water – just immerse it completely in water for a few seconds. Regular rain won’t affect it, but a Magic Rainstorm will douse a brand instantly.

• Fire – a brand, placed in a greater fire, will burn like common wood.

When it goes out it’s just a burned stick, worthless for anything except a bit of firewood.

The flame from a brand is smokeless, and may be tinged with whatever color the wizard chose when the spell was cast. A brand can be used as a weapon like a torch.

The Brand enchantment, cast on an arrow, creates a reliable flaming arrow which will remain burning for a minute after it is fired.

A Brand does not require a regular Magic Item Creation spell. It can be made by any wizard who knows 7-Hex Fire. Casting the spell that way requires 4 ST. A Brand usually sells for $60, but prices may go up if the wizards are busy or a big adventuring party is buying up the supply.

Normally, when your ST reaches 0, you fall unconscious. This amulet allows you to stay conscious at ST 0, though you still die if you take one more hit. Any warrior or combat wizard will appreciate the advantage of – just possibly – getting in one more shot at the foe. Or, at the least, going down shouting defiance with your very last breath.

In appearance, this amulet is simply a stone with a single hole in it. It may be an elaborate jewel on a necklace, an elegant jade ring, or a mere river pebble worn on a thong around the neck.

Cost of the enchantment is $2,000. To this, add any cost for the jewelry that you started with. River pebbles, of course, are free.

There are two cautions with this item. First, if you reach ST 0 while wearing this, there is a 1 in 3 chance that the amulet will break. If you survive, you will probably be so happy that you won’t mind! Second, there is no way to test it without Reveal Magic, and many credulous travelers have been sold ordinary river stones or cheap jade rings with no powers at all.

Creation stats are the same as the Silent Movement item.

This potion quells a wizard’s powers for slightly more than 24 hours. Its main uses are:

• to hold a wizard prisoner without having to bind, gag and shackle him

• as part of an assassination or coup attempt against a wizard

• as a really expensive and nasty practical joke

It is mildly poisonous, and can be detected and cleansed like other poisons. This is a good thing for wizards!

The Wizards’ Guild disapproves of anyone making the Potion of Imprisonment without their specific permission and a very good reason.

Cost is $1,000 per dose if you can get it through approved channels, but much higher if you have to go to the black market. For an Alchemist to make it: spend $585 in common ingredients and add a bit of your own hair. Takes five weeks.

An enchanted spike of solid silver. It is much smaller than a regular spike, but must look like a spike in order to work. Its basic power is that, once driven in place, it holds until the person who placed it touches it and says “Free.” It has three main uses for the adventurer):

In dungeoneering, it can be placed under a door to spike it closed or open. This can be done quickly, with one hand, unlike regular spike-driving. Each such spike, to a maximum of 5, counts as a Lock spell and adds 10 to the door’s ST against other attacks. If the door is forced anyway, the spikes(s) are ground against the dungeon floor, ruined, and become inert silver.

In climbing, a Holdfast Spike can be driven into any material . . . even soft earth, as long as it will hold the weight of the spike itself! It will then hold up to a ton of weight. Up to five spikes can be used together. Should they pull free, they are undamaged.

In journeying, a few spikes driven into the ground will hold any but the largest riding animal. (But don’t try to stake out a horse with just one spike; horses are strong and heavy and can easily put more than a ton of stress on their picket.) Again, if they pull free anyway, they are undamaged.

Clever adventurers, not to mention architects, will think of many more uses for this physics-defying little device.

Cost: Lesser Magic Item Creation, starting with an elaborately engraved 4-inch silver spike ($1,100 from a goldsmith); thence, as for the Amulet against Drowning.