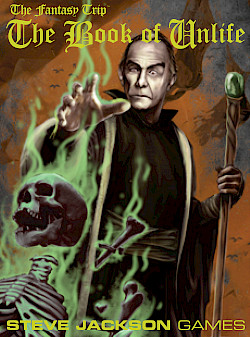 This is a report on upcoming Fantasy Trip projects, as of today. I am very pleased that we have enough Good Stuff in progress to go well into 2021.

Decks of Destiny
This big-box super supplement (say THAT three times quickly!) is now reaching U.S. backers. Yes, we do have some extra copies, and we’ll probably put them in Warehouse 23 in March.

Mini Labyrinth Pack
This is a subset of the hex-shaped labyrinth cards in Decks of Destiny. It comprises the most “generic” cards, so it can be used by itself, or shuffled in with the Decks of Destiny set to make it bigger.
It will be in Warehouse 23 soon for a big $2.00, but don’t buy it if you are coming to FnordCon, because it will be part of the swag there.

d12/d3 Dice
There’s no easily rollable design for a 3-sided die. But this specially marked 12-sider can be used for both d12 and d3 rolls, because polyhedra are fun. Now in Warehouse 23.

Hexagram
We’re having fun producing the zine, and both learning and earning enough to make it worthwhile. Issue 4 is finished. The Kickstarter will be launched February 10 and the zine will ship in April.
This will be a short project with no stretch goals. Previous Hexagram projects (find earlier issues on Warehouse 23) have started with a small zine and added pages as stretch goals, but we don’t want to make future issues any smaller than the first ones, so we’ll just start at “40 pages including cover” and that’ll be the size.
I have enough submissions for half of Issue 5 already, and a good idea for an add-on relating to one of the articles, so you can figure there will be at least one more Hexagram.
I also have a neat idea for an add-on if we do an Issue 6, but I don’t want to commit to it quite yet.

The Book of Unlife
This is a 64-page book by Howard Kistler, covering unliving and undead creatures. It includes an adventure setting. It’s very far along; everything is done but the art and Rick Hershey is making daily progress on that. Here’s the cover . . .
We think this will be an April Kickstarter on the Warehouse 23 account. Because there will not be anything but the book itself, it can be printed domestically, so we might be fulfilling this one within a month of closing the campaign.

Postcard Adventures
A free PDF of all the entries in the Hexagram postcard contest. Almost finished; we just have to buckle down and complete it. (Update as of Jan. 24: Done! It's now available on W23.)

Warrior and Octopus Dice
Big metal d6 featuring art by Liz Danforth. These should be in Warehouse 23 in the spring. We hope. These dice seem to challenge the manufacturing process. We rejected the first batch from the factory, and we’ll keep rejecting anything that isn’t awesome. But we know they can do it, so eventually you’ll see these.

Red Crypt
A 20-page solo from David Pulver . . . enter a haunted cemetery and find out that there are far worse things than ghouls. Art and cover are not yet done. This might still be an April Kickstarter – we might even release it at the same time as the Book of Unlife in a single campaign.

Ardonirane
A 72-page book about the city of the Thorsz. David Pulver’s first draft was so good that this project jumped ahead on the schedule; we didn’t need to request a final draft. Still needs art and cover.
We think this might be a Kickstarter in June/July, launching after backers get Red Crypt and Unlife. This is another “just a book” project that could fulfill within a month.

TFT Adventures 2
In the format of TFT Adventures: five 12-page dungeon-crawl adventures. Four out of the five are already in production. Will include counters, so it’s an overseas print job. Still, it should be a late 2020 release.

Bestiary
We might call it “The Bestiary of Cidri” or something like that. This is a big book from Guy McLimore and Greg Poehlein . . . I am still only up to D in reading it, and I don’t want to guess exactly how many pages it will be.
Our vision for this one includes counter sheets for creatures, and cards in the Decks of Destiny format for new monsters. Those would be good stretch goals.
This might be a late 2020 release, but it’s likelier to slop over into 2021, since the cards and counters would make it an overseas print job.

Old School Monsters
A 64-page book of outlandish creatures that you first saw in The First RPG Ever, published under the Open Gaming License and adapted for TFT by yours truly. Should include counters and creature cards, so it’s probably a 2021 release.

T’Reo School
Maybe “The T’Reo School of Martial Magics.” Remember the intro to Wizard, with the duel between the young sorcerers? David Pulver is writing a 64-page book about the school that trains those combat wizards. First draft expected 7-1-2020. Almost surely a 2021 release.

We’re already working on other things for 2021 and beyond, but those are the ones that are far enough along to talk about!