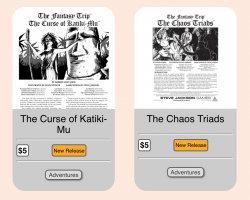 We're happy to report that we've now published two new adventures for The Fantasy Trip, and both are available right now in PDF!

These two are the first in a series of adventures for use with The Fantasy Trip. To catch each new PDF as they are released, please follow us on Twitter, Facebook, and Kickstarter.