From The Space Gamer - Converting T&T Characters to TFT 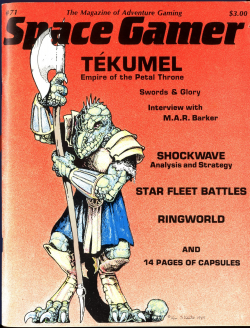 Tunnels & Trolls is published by Flying Buffalo Inc., and this article is reproduced by their kind permission.

As one of many gamers who thought Metagaming’s Fantasy Trip was the only really playable FRP system, I was pretty upset at the demise of Metagaming, and worried more than I should have about whether there would ever be any new TFT material. Reluctantly, I began looking at other systems. I had already tried many of them and gotten no satisfaction, and most of the ones I found on store shelves seemed no better. Then I happened on Tunnels & Trolls, and realized my luck had changed.

T&T and TFT have an awful lot in common. Both require only ordinary, six-sided dice. Both are easier to learn than most other systems. Most importantly, both systems possess a logical framework that makes it easy to apply a simple procedure – the saving roll – to any number of tasks in the game world. T&T is even more freeform, however, than TFT: There is no need for a playing board to regulate movement; it is easier to attempt tricks and original stratagems in combat; and the monsters can be easily adjusted to the powers of the player characters. Now that I have some experience as a GM, I can accept this freedom as a positive value, and realize that in T&T I have found not a TFT substitute but a system with many unique virtues of its own.

When I first turned to T&T, though, I realized that my players would be more likely to try it if I allowed them to use their favorite TFT characters, so I had to work out a method of converting TFT stats to T&T.

At first sight, this task might seem simple: TFT characters have ST (Strength), DX (Dexterity, and IQ (Intelligence); why not just roll for CON (Constitution), LK (Luck), and CHR (Charisma) in order to complete their T&T profiles? This method did not strike me as fair. Imagine an experienced TFT character with ST 20 rolling a 5 for CON. In TFT, the character might have been used to charging recklessly at his foes, confident he could take on almost anything. But in T&T he would be as afraid of facing trouble as a feeble old blind beggar. Clearly, he would not be the same character.

The method I finally settled on was to base CON, LK, and CHR on the average of a 3d6 roll and one or more TFT attributes. Thus a character’s TFT strengths (and weaknesses) would be carried over into T&T, but attributes could still diverge markedly, as they are supposed to in T&T. I base CON on ST because ST in TFT serves the same purpose CON does in T&T; I base LK on DX and IQ because a nimble, clever TFT character tends to be luckier than his or her cohorts; and I base CHR on ST and IQ on the theory that fit, witty people are more attractive than out-of-shape dullards. (Most people who say muscles are ugly – on women or on men – are just plain envious.) With a few more adjustments for race, possessions, and magic, this system achieves a fair and accurate translation from TFT to T&T.

The steps in the adaptation process are as follows:

1. Find the number of attribute points the TFT character has gained since entering the game by subtracting his or her beginning attribute total from the present total. From the result, subtract 2, then 3, then 4, etc., until the next subtracted number would bring the result below zero. The last number you subtracted is the character’s T&T level. For example, a TFT human with attribute total 45 is a 4th­level character in T&T.

(TFT Reptile Men are treated in T&T as permanent were-types, except that they retain their normal DEX and can still use weapons. Friendly Reptile Men should be extremely rare in the T&T universe. TFT Prootwaddles can safely be kept out of T&T altogether.)

5. T&T characters receive AP appropriate to their level, plus any TFT EP they have squirreled away.

6. Possessions are translated into T&T as nearly as possible. A magic staff in TFT is equal to a T&T staff ordinaire. A TFT staff-of­power is a staff deluxe, but as yet possesses no spells its owner does not have.

There are few weapons in TFT that cannot be found in standard T&T. One exception is the boomerang, but it is not hard to come up with a T&T equivalent for it. In TFT, a boomerang requires a ST of 11 and does as much damage as a light crossbow. If the GM assumes that a boomerang is similar in effect to a light crossbow in other ways, he might decide that in T&T it does 4 dice damage, requires ST 11 and DEX 10, weighs and costs about as much as a baton (20 WU, 10 GP), and has about the range of a javelin (40 yds.). This is just an example, and GMs may have other interpretations (especially if they are more familiar with boomerangs than I), but it should not be difficult to come up with fair assessments.

GMs may translate TFT magical items into T&T as they see fit – or simply declare that the magic in the item has worn out.

7. A wizard whose DEX or IQ, inherited from TFT, is too low for a wizard in T&T has low attributes adjusted up to the T&T minimum: DEX 8 and IQ 10.

9. TFT heroes without any spells must choose whether they will be warriors or rogues in T&T. The GM may allow qualified heroes to become warrior-wizards.

Now that the guidelines are spelled out, let’s take a typical TFT character and see how he converts to T&T. Our convert is Arkebus, an Elvish Wizard.

Step 6: In exchange for his labyrinth kit, Arkebus might be given the standard T&T clothes and pack. His two rations might be worth two days’ provisions. His magic staff is a T&T staff ordinaire. And he has 2 GP and 30 SP.

Step 7: Not applicable to Arkebus.

Step 8: In addition to his Level 1 spells, Arkebus might be given Blasting Power (L3) for TFT Lightning, Rock-A-Bye (L3) for Sleep, Curse You (L2) for Curse, and Mirage (L2) for 4-Hex Illusion. Although he has the DEX and IQ to learn L4 spells, none of his TFT spells parallel them, so he doesn’t get them. (And if he wants to buy them, he’ll have to increase his assets considerably).

Step 9: Not applicable to Arkebus.

Arkebus’ height and weight can easily be rolled up without reference to his TFT existence. And if his brother Arbelest, a warrior, wants to keep his TFT skills, they can easily be adapted into T&T with the skill system from Mercenaries, Spies, and Private Eyes. (Any TFT skills without specific MSPE equivalents can be treated as Special Interests). I think Arkebus and Arbelest will enjoy their adventures in the T&T universe, and I believe they can carry on their careers from TFT with a minimum of system shock. Moreover, I do not think the two Elves will be alone in their new­found gaming pleasure.

. . . And Adapting Them Back Again

Characters who have found and enjoyed adventures in the T&T universe may nonetheless not want to stay there forever. Perhaps they left friends in the world of Cidri. Perhaps they have a favorite Microquest they’re dying to get back to. Or perhaps things are just getting too hot in a world of MR 270 Flame Demons. Whatever the reason, players may want to convert their characters from T&T back to TFT. (In my campaign, for instance, I am using T&T for PBM encounters and both T&T and TFT for face-to-face play.) The reconversion is not difficult at all.

An important difference between the two systems is that T&T tends toward bigger numbers. Weapons do more damage, armor stops more hits, magic costs more ST, and, once characters have begun to advance, attributes increase to much higher levels. ST 60 characters are quite common in T&T; in TFT, the suggested natural lid on the ST of human characters (30 pts.) is rarely needed, for few characters even get that strong. (The T&T character will need this extra ST, and it can be argued that ST 60 in T&T is actually equivalent to, say, ST 25 in TFT). The point is that, once a character reaches the higher levels of T&T experience, high attributes cannot be transposed unchanged into TFT.

The fair thing to do is to keep a copy of your TFT character sheet once you have finished translating into T&T. Every time your T&T character goes up a level, add one attribute point to his or her somnolent TFT counterpart. If T&T level bonuses go to ST, DEX, or IQ, add the point to the corresponding TFT attribute; if to CON, add to TFT ST. If to LK, add either to TFT DX or IQ (player’s choice); if to CHR, add either to ST or IQ (again, player’s choice). The basic rule is that after some time in the T&T world, one T&T character level equals one TFT attribute point – a conversion factor that allows a fair balance between systems. (And if you choose the T&T option which allows you to add to ST and CON, be careful to add only one point to your TFT ST.)

Conversion of property, spells, and skills from T&T to TFT requires the old gamer’s standby, common sense. Just reverse the guidelines in the main article. T&T Adventure Points and TFT Experience Points may be considered roughly equivalent, so points gained in a quick adventure in one system may benefit the character in the other system.

So be the first warrior on your continent to go through both Deathtrap Equalizer and Death Test. And don’t be surprised when the innkeeper says: “There’s something strange about you, traveler.”